The end of another love story. Blake Shelton and his wife Miranda Lambert have split after four years of marriage, Us Weekly confirms.

PHOTOS: Blake and Miranda, the way they were

“This is not the future we envisioned,” their representatives tell Us Weekly in a statement. “And it is with heavy hearts that we move forward separately. We are real people, with real lives, with real families, friends and colleagues. Therefore, we kindly ask for privacy and compassion concerning this very personal matter.”

A source tells Us that since the split Shelton has been working on new music late into the night in the recording studio.

The country music power couple, who have collaborated numerous times, met in 2005 at CMT’s 100 Greatest Duets Concert, when Shelton was still married to his first wife, Kaynette Gern.

The “Honey Bee” crooner, 39, and his childhood sweetheart Gern divorced in 2006, and he started his relationship with Lambert, 31, soon after. They married in May 2011 in Texas, and Us Weekly shared the exclusive wedding photos. 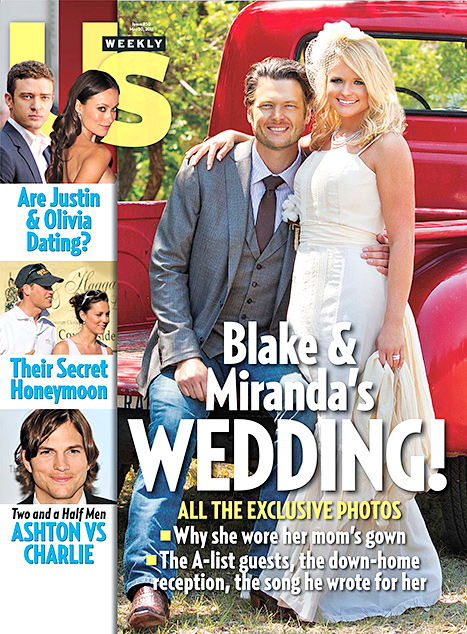 The chart-topping superstars have been heavily involved in one another’s musical careers, co-writing the emotional hit song “Over You” about Shelton’s late brother Richie.

Back in January, the “Gunpowder and Lead” singer opened up about her relationship with Shelton in Marie Claire, saying, “I’m not sunshine and roses. Blake’s the happiest person on the planet. He pulls me out of my darkness… Literally, everything is the best about being married.”

Though they gushed about one another in their interviews — and adamantly denied rumors of cheating or marital trouble — the pair have previously admitted that they rarely spent time together thanks to their demanding schedules.