When you’re a member of one of the first families of reality TV, there are going to be some naysayers.

For proof, look no further than a story omg! recently posted about Kardashian matriarch Kris Jenner landing her own talk show.

“The kartrashians are like a virus they are contaminating everything they touch and it is contagious” and “Why can’t these idiots all go away?!” are just two examples of some of the mean things people wrote in the comments.

Now, Kendall Jenner, the 17-year-old younger half-sister of Kim, Kourtney, and Khloe, tells omg! that dealing with those negative peeps can be more than a little frustrating. Her family’s strategy is simply not to let it get to them.

“I can’t let haters, people that are going to judge me or say negative things, I can’t let all of that stop me,” Kendall says. “I can’t let that get to me, because then it’ll make me go crazy. And yeah, it sucks, and yeah, I do see it, and it does get to me a little bit. I just can’t let it get to me anymore. It’ll stop me from doing so many things, so many things that I want to do, and that’s not how to live your life.î

Of course, we know that the Kardashians also have lots of supporters, and they wouldn’t be where they are today if people didn’t read stories about them, watch them on TV, or buy their products. Kendall says she tries to focus on the fans.

“You will get so many people Khloe told me this saying ‘I love you, I love you, oh my God, you look perfect in this picture, you’re beautiful’ … and that one person that says ‘ew, you’re ugly’ or ‘I hate you’ is the person that’s going to get to you. But you have so many people that love you,î she shares. ìI have such an amazing family, and I’m so blessed, you just can’t let things like that destroy you. You’ve got to have peace of mind.”

The class of critics that especially bothers Kendall are those who still think of her and her younger sister, 15-year-old Kylie, as little girls too young to, say, post photos of themselves in bikinis online. On Wednesday, Kendall felt so strongly about the topic that she tweeted, “I AM growing up and some of you are having a hard time accepting that. worry about yoself, weirdos” a message that she explained in our interview a few hours later.

Despite the haters, the Jenner sisters are on their way to becoming savvy businesswomen just like their siblings. The teens, who are home-schooled, are already professional models, columnists for Seventeen magazine, authors of a forthcoming sci-fi book for young adults, and now, clothing designers. Their line of California cool tops, shorts, and dresses will be available at PacSun stores and online beginning February 8.

The ladies are so independent that Kylie notes they didn’t even turn to their big sisters who already run their own clothing line for help.

“We actually didn’t want advice from our sisters,” Kylie reveals. “We wanted it [to be] more about me and Kendall, and organic thoughts.”

Kylie adds that she and Kendall were both “very involved” in designing the pieces, and she’s happy with the result.

“We wanted to make it very springy, summery, with kind of a California vibe,” she explains. “So I love how it turned out.”

And that’s what really matters.

Lindsay Lohan’s Hall of Shame: A Look Back at Her 5 Mug Shots

5 Reasons We’re Excited for the Super Bowl ó Make That the Beyonce Bowl! 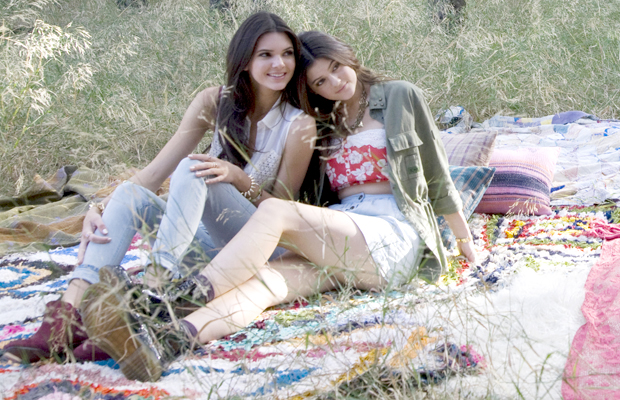