Dancing With the Stars’ Jana Kramer has two-stepped her way through her share of troubled relationships. “I’ve always wanted to have a family, to be married,” the singer admitted to Us Weekly in 2015. “And I wanted those things so badly that I’ve forced things before.” After calling off a seven-­month engagement in August 2013, the “I Got the Boy” singer realized she needed to take a break from romance. “For the first time in my life,” she continued, “I was happy being alone.” 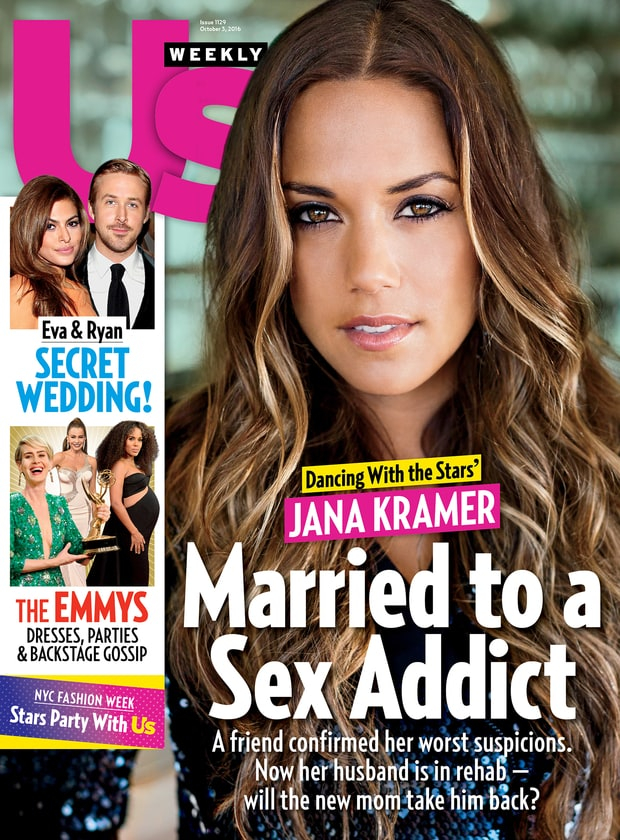 And then she met NFL tight end ­Michael Caussin. When the twosome connected in June 2014, the twice-divorced Kramer was convinced her unlucky-in-love streak was over. “I was in such a good, healthy place that everything just fell into place — it was easy,” raved Kramer 11 days before their May 2015 wedding. “He’s a great listener, we communicate really well together and we have so much fun. It just works.”

Or so she thought. As Kramer was fulfilling her fantasy — baby Jolie arrived January 31 — the former Washington Redskins pro, 29, was betraying the woman he once called “my partner in crime.” A source close to Kramer reveals in the new issue of Us Weekly, “Mike cheated on her multiple times with multiple women.” Though the ACM Award winner, 32, had her suspicions — the two even split up after he strayed in 2014 — she was hesitant to leave the father of her child. But when a friend approached her this summer and confessed that she believed a paid escort she knew was sleeping with Caussin, Kramer realized she could no longer ignore the red flags. She announced their separation in August and weeks later hinted that the athlete’s wandering eye was to blame, posting an Instagram clip of herself singing Carrie Underwood’s “Before He Cheats.”

As a last-ditch effort, Caussin, retired since 2015 with hip and knee injuries, entered Mississippi’s Pine Grove rehab facility to treat his sex addiction, reveals a Kramer insider. But a source says there’s no rehabilitating their 16-month union. “Jana finally woke up — she knew she couldn’t do it anymore,” says the source. “They’re definitely done.”

PHOTOS: Before They Were on Dancing With the Stars!

The problems started early for the One Tree Hill alum and the James Madison University football standout. She was smitten after their June 2014 introduction. “When he walked on my tour bus, I was like, That’s the man I’m going to marry,” she recalled to Us in 2015. But two months later, says the Kramer insider, “he cheated on her.” Devastated, Kramer wiped him from her social media accounts, cryptically tweeting: “Never trust anyone.” But her stance quickly softened, and the two reconnected. “She really did love him,” says the insider. “She ignored the warning signs because she cared about him.” By December, the Nashville-based pair were engaged and planning a rustic wedding at Pippin Hill Farm & Vineyards in his native Virginia.

Yet even as the singer selected the peony-and-rose floral arrangements and lavender-flavor wedding cake, she had her doubts. When Caussin was away on his bachelor weekend, Kramer borrowed a pal’s phone to try to catch him cheating. “She texted him, saying something along the lines of ‘Had fun last night,’” says the insider. “She was trying to bait him to see if he had met anyone.”

When she didn’t catch him in the act, Kramer was convinced he was a changed man. Says a Kramer pal, “She told friends she really believed the cheating would never happen again.” Her worries assuaged, she allowed herself to envision their future. “I always said my greatest job will be being a mom and he’s going to be the best dad,” the Michigan native told Us days before their vows, adding that they had already selected baby names. “It’s going to be a great chapter for us.”

At first, it seemed they were destined for a happy ending. Three months after their Christian ceremony, Kramer announced she was 15 weeks pregnant. And by her account, Caussin was a doting dad-to-be. “My husband has been very patient,” she told Us as they walked the red carpet at the BMI Country Awards that November. “I’m like, ‘Honey, I need a Pop-Tart!’ And he gets it.” Chimed in the athlete, “Everything she asks for, I do.” That continued after Jolie’s arrival. In Kramer’s eyes, they were a team. Whenever she needed a break from the endless feedings and diaper changes, “he’s like, ‘I got her. Go do what you need to do,’” she told Us in a May 25 interview. “He was a big video game player, and now there’s cobwebs up in the media room.”

He had a harder time letting go of other habits. The source says marriage and fatherhood did not slow down his philandering: “Things were not any better.” Neighbors in their Tennessee community began to approach Kramer with rumors they had heard about her husband. “Nashville is a small town,” explains the source, “so people would tell her things about his cheating.” The chatter finally led Kramer to scroll through her man’s ­cellphone. “She saw some texts,” reveals the source. But even that wasn’t enough for her to call it quits. “Jana has had difficulty in relationships,” notes the Kramer pal. “She is a sweet girl, but she loves being in love and tends to turn a blind eye to trouble.” (In the May interview, Kramer joked with Us that she and her ­husband “have battles about how we fill our dishwasher.”)

Her eyes were forced open this summer when a friend approached the “Circles” singer claiming Caussin was sleeping with a paid escort. “The only reason Mike got caught is because the escort knew Jana’s friend,” claims the Kramer insider. (Caussin declined to comment.) In an effort to restore his wife’s trust, he agreed to go to rehab for sex addiction — checking into the Hattiesburg, Mississippi, spot where Tiger Woods sought treatment.

“Sex addiction is a pathological relationship with a behavior,” says Timothy Lee, a certified sex­addiction specialist at NYC’s New York Pathways. “There’s an adrenaline hit the brain is seeking.” The 30- to 45-day rehab “focuses on abstinence,” he explains, adding that after an enforced 90-day sex-free period, addicts attend weekly group therapy and 12-step meetings. (Pine Grove also offers ropes courses, biofeedback and yoga.) The insider says Caussin is focused on recovery: “He definitely wants to be with her.”

Kramer is less than convinced. Though a Dancing With the Stars insider notes she still wears her thin diamond wedding band “and always uses the word ‘separated,’ not ‘divorced,’” the source predicts she’ll be using the d-word soon. “This is it,” says the Kramer source. Adds another friend, “She’s focused on dancing, her baby and her new album.” Competing for the mirrorball trophy — while finishing the last eight dates of her 2016 tour — has been a welcome distraction, admits Kramer. “It’s a tough time,” she told Us after the September 12 season premiere, during which she marveled that the competition had been “a huge healing process” for her. Not to mention a great way to get her groove back. “It’s been fun to just work on me,” she told Us September 7. “It’s not just about dance. It’s about gaining confidence.”

For more on Kramer’s big split, pick up the new issue of Us Weekly. And to check out Kramer’s mom tips, check out the video above.