Scoop up Amazon's Most In Demand Pull Up Sweater for 46% off!
Jennifer Aniston’s Facialist Compared This Mascara to Having Lash Extensions
Scoop Up the Foot Massager Kris Jenner Gifted to Her Daughters — $120 Off!
END_OF_DOCUMENT_TOKEN_TO_BE_REPLACED

As Katie Holmes roamed the streets of Paris’ Left Bank in early May, she found herself in the mood for romance. With boyfriend Jamie Foxx filming miles away, the actress directed her driver to stop at San Francisco Book Company, a secondhand English bookstore on Rue Monsieur-le-Prince.

The chauffeur popped inside, a source reveals in the new issue of Us Weekly, and picked up a selection of classics by famed American novelist Ernest Hemingway, including A Moveable Feast, the memoir he penned about his years as a struggling writer in the French capital. Explains the source, “I guess she was interested in Hemingway’s Paris.” Also on her wish list, says the source, the Pulitzer Prize-winning short novel The Old Man and the Sea, and the romance novel A Farewell to Arms.

Holmes is writing a love story of her own. Four years after the 38-year-old actress and longtime pal Foxx, 49, embarked on a flirty summer fling, “she’s head over heels for him,” says a source, and ready to finally broadcast their relationship.

For a while, an insider explains of the mom to 11-year-old Suri, her daughter with ex-husband Tom Cruise, 54, “she was super worried about the attention.” But years in, continues the insider, “She’s tired of playing this hiding game.”

Holmes took her first step out of the shadows April 2, joining Foxx at an NYC eatery — and on May 7, she took a flying leap, jetting to Paris, where Foxx is filming his 2018 Robin Hood remake. The insider predicts more romantic getaways in the future: “They’re talking about planning a summer trip together in Europe.”

The five-star Park Hyatt Vendome provided the backdrop for the couple’s Parisian rendezvous. After the Logan Lucky actress landed in Paris, a driver brought her to the luxurious site — where the nearly 1,300-square-foot Ambassador Suite costs upward of $3,500 a night — and a waiting Foxx. 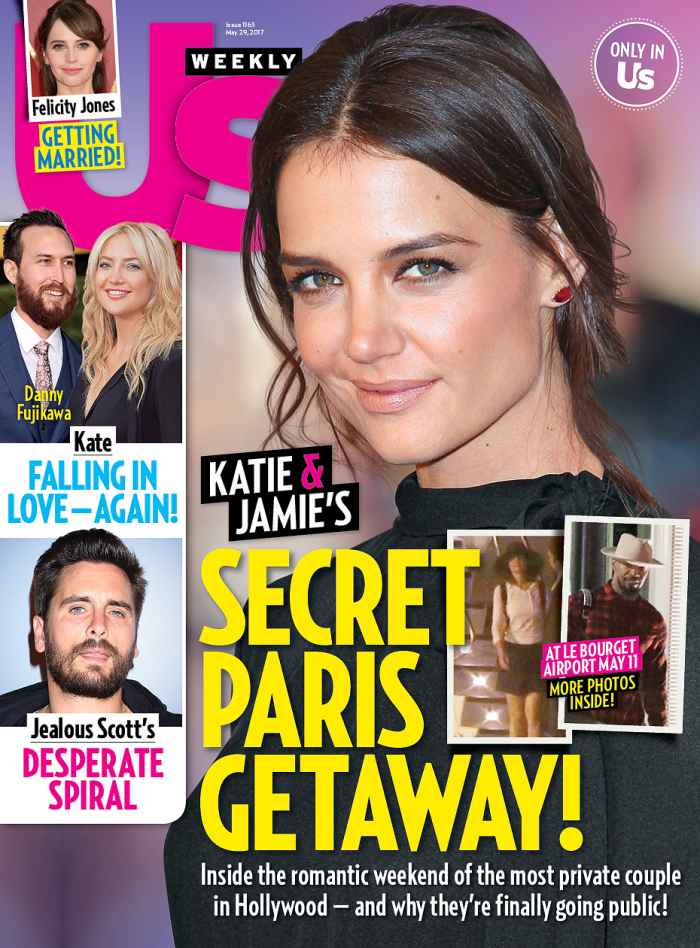 Since the Oscar winner was filming for much of Holmes’ four-day stay, says a source, she made it a point to visit him at the Cité du Cinemas studio complex. “She didn’t really mix with the other actors and crew,” says a studio insider. “We were barely aware of her. There are always hundreds of people milling around, so it would have been pretty easy for her to keep a low profile.”

But a source says Holmes doesn’t want to keep hiding her romance. “They’re going to go out to dinner more often,” says a source, “and plan to start going public.” For her part, the actress is finding it hard to keep her feelings inside. Says a source, “She gushes about how amazing he is. She says she loves him from the tips of her toes to the top of her head.”

For more on the couple’s romance, pick up the new issue of Us Weekly, on stands now!

Scoop up Amazon's Most In Demand Pull Up Sweater for 46% off!
Jennifer Aniston’s Facialist Compared This Mascara to Having Lash Extensions
Scoop Up the Foot Massager Kris Jenner Gifted to Her Daughters — $120 Off!
END_OF_DOCUMENT_TOKEN_TO_BE_REPLACED