Maybe she was just craving some wings!

Of course, the newly single starlet tried to keep a low-profile but, let’s be honest, she wasn’t about to go unnoticed. Still, we have to give her props for all the uncharacteristically smiley photos she took with fans — and Hooters girls, natch — throughout the night. 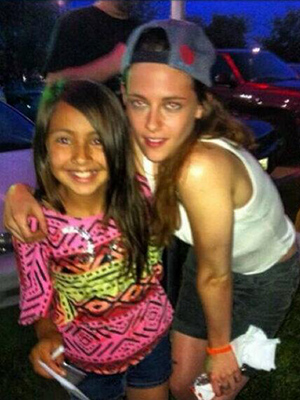 KStew rocked a white tank top and seemed to be laughing to herself as the ladies in short orange shorts said “cheese.” In another pic, the 23-year-old is posing with her arm sweetly wrapped around a young fan.

According to one woman on Twitter who claimed to see the star, Stewart was visiting the Texas town to see Cadillac Ranch, a public art installation that features old Cadillac cars.

Despite her recent breakup, Stewart has plenty to smile about. The actress recently signed on to two new movies, “Camp X-Ray” and “Sils Maria,” in which she’ll play an assistant to Juliette Binoche’s lead character.