Three seasons into their documentary series Scientology and the Aftermath, Leah Remini and cohost Mike Rinder say they still receive plenty of fresh ire from their former church. “I get threats,” the Second Act star, 48, reveals in the latest issue of Us Weekly. “They try to destroy our lives.”

After a special episode about Jehovah’s Witnesses aired on November 13, Scientologists blamed the show for inciting a string of arson attacks on the group in Washington state. Though the first attack made headlines in March (eight months before the special aired), the Church of Scientology maintains that 2017 reports that Remini would be looking into the Jehovah’s Witnesses were enough to incite hate. The church says she “has made anti-religious bigotry her private cottage industry.”

Remini, 48, says she’s able to cope with the backlash from the church because, “I just know it’s what Scientology does.They just use any avenue they can.” For more on Remini and Scientology, check out the video above. 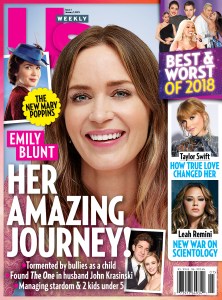 And for even more, pick up the new issue of Us Weekly, on stands now.