Kristen Bell hosted the 2014 CMT Music Awards on Wednesday, June 4, and made light of Jay Z and Solange‘s infamous post-Met Gala elevator fight in the opening credits with the help of country music’s hottest stars.

In the scene, Bell waited for an elevator while surveillance footage showed Luke Bryan and Florida Georgia Line (Tyler Hubbard and Brian Kelley) punching and kicking each other. The hilarious reenactment spoofed Jay Z, Solange and Beyonce‘s exact movements from the original May 5 footage. 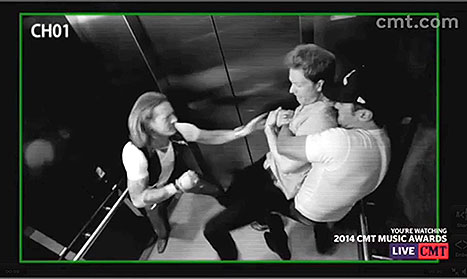 Bell kept the funny up throughout the night, at one point, dressing up as Alan Jackson, who received the first ever CMT Impact Award.