Your Horoscope: What’s in Store for You This Week!
William and Kate Were 'Flummoxed' Over Harry and Meghan's Netflix Trailer
People's Choice Awards 2022: Complete List of Winners and Nominees
END_OF_DOCUMENT_TOKEN_TO_BE_REPLACED

Malia Obama has been touring colleges as of late, and it appears typical student activities haven’t been excluded from her schedule — and by student activites, we mean parties.

According to a Snapchat screenshot obtained by The Daily Caller, the 17-year-old was caught playing — or at least standing close to — a table filled with red Solo cups while at Brown University in Rhode Island last weekend.

Participating or not, President Barack Obama’s eldest daughter was clearly the center of attention — well, according to Twitter at least.

“Standing next to Malia Obama at a party nbd,” one student tweeted on Saturday, Oct. 10, while another added: “When you’re at a party and secret services show up and everyone freaks out but it just ends up being Malia Obama.” 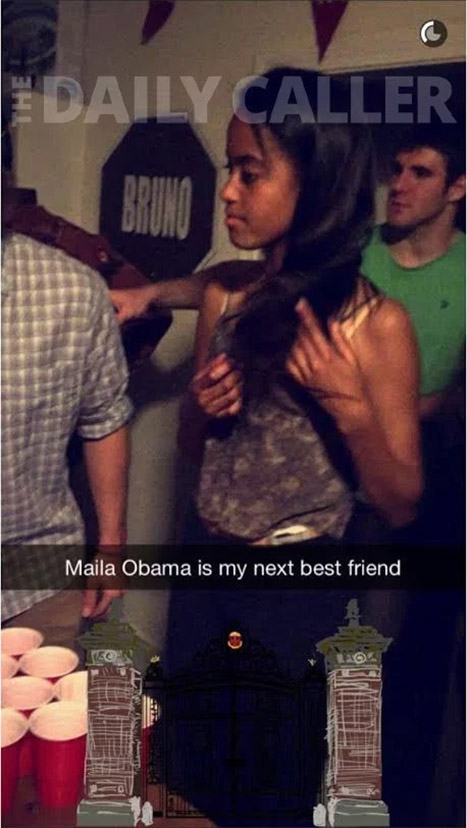 According to Buzzfeed, an anonymous tweeter claimed: “Malia obama was taking shots and playing beer pong at a party last night LOL.”

Obama has come to terms with his little girl growing up and has already offered her his words of wisdom.

“One piece of advice that I’ve given her is not to stress too much about having to get into one particular college,” Obama said last month while talking to students at North High School in Des Moines. “Just because it’s not some name-brand, famous, fancy school doesn’t mean that you’re not going to get a great education there.”

For the record, Malia has already visited a number of the top universities — and potentially, their parties — including Columbia, Harvard, Princeton, the University of Pennsylvania, Yale, Stanford, the University of California, Berkeley, New York University, Tufts, Barnard, and Wesleyan.

Malia, a senior in high school, is expected to start college next year.

Your Horoscope: What’s in Store for You This Week!
William and Kate Were 'Flummoxed' Over Harry and Meghan's Netflix Trailer
People's Choice Awards 2022: Complete List of Winners and Nominees
END_OF_DOCUMENT_TOKEN_TO_BE_REPLACED