“Mama June” Shannon is making the rounds to tell her side of the story. The embattled Here Comes Honey Boo Boo matriarch, whose TLC show was cancelled after she was romantically linked to a registered sex offender who was convicted of molesting one of her daughters, recently sat down with Dr. Phil McGraw.

In a sneak peek of the sit-down, which airs on Monday, Nov. 17, Dr. Phil grills June about allowing her kids, Alana “Honey Boo Boo” Thompson, 9, Lauryn “Pumpkin” Shannon, 14, and Jessica “Chubbs” Shannon, 18, around her criminal ex-boyfriend, Mark McDaniel, who allegedly and repeatedly molested her eldest daughter Anna when she was 8. 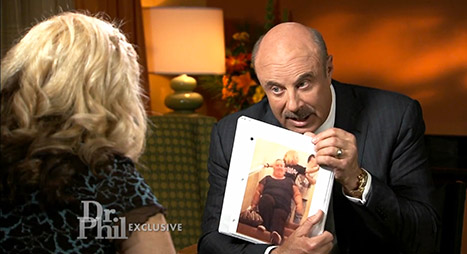 “That’s Alana, and she’s [only a year older in this picture] than Anna was when [McDaniel molested her], and you [said] you took Pumpkin [to meet him so she could ask him] questions, but you also brought Alana there?” Dr. Phil questions June while holding a picture. Dr. Phil is referring to June’s most recent confession that she only took her daughters to see McDaniel because Pumpkin needed closure after believing McDaniel was her biological father. (As previously reported, Pumpkin’s real dad is actually another registered sex offender named Michael Anthony Ford.)

“Because my kids don’t go anywhere without me 24 hours a day,” Mama June explains to Dr. Phil.

In the no-holds-barred interview, June also denies having rekindled things with McDaniel and claims that he has a different girlfriend now. The mom of four also says one of the alleged photos of her with McDaniel was photoshopped.

Despite TLC pulling the plug on the reality show, Mama June says it’s all good. “I have nothing bad to say about TLC,” the former reality star reveals. “They have been good to me. They still are very good to me. You know the rumor is that I was not going get paid with the show, but I did get paid through whatever was owed to me through the show. My kids got paid in their trust funds. Sugar Bear got paid. Everybody got paid that was owed from the show. They’re still taking care of the girls today with tutoring. Which I’m very, very grateful for. They’re taking care of some other things for the girls, I’m very, very grateful for. And I’m grateful for the experience.”

Check your local listings to catch the interview on Monday, November 17. Watch the sneak peek above now.