Big Brother's Alyssa Snider and Kyle Capener Split
Jennifer Garner Has 'No Desire' to ‘Slow Things Down’ With Love John Miller
‘Seinfeld’ Cast: Where Are They Now?
END_OF_DOCUMENT_TOKEN_TO_BE_REPLACED

Royal wedding, take two? A source predicts Prince Harry will propose to actress love Meghan Markle near the anniversary of their first date. “They will be engaged by the end of summer,” the source says in the new issue of Us Weekly, adding that the former Apache helicopter pilot, 32, and the Suits star, 35, “have spoken candidly about their future. They see a life together.” Find out more in the video above, and detailed below!

Planning for a shared future means deciding on a shared address. Since late December, Toronto-based Markle has all but taken up residence at Harry’s two-bedroom Kensington Palace flat. (Before flying back to Canada in late February, she had spent just three weeks away from the palace, and a source says security has taken to waving her in as if she were a permanent resident.)

An insider says the two won’t make an official call on cohabiting until Markle wraps her series this summer, but “Meghan feels a move to London is inevitable,” says the source. “It’s not like Harry can uproot!”

At least Nottingham Cottage already feels like home for her. Along with storing a few personal necessities in the pad, a short walk from Prince William and Duchess Kate’s 21-room spread, Markle has added some small touches. “Harry knows very little about interior design, and that’s something Meghan is particularly good at,” explains a Markle pal. “He has a few more plants, nice candles — and his kitchen is well-stocked too!”

Thanks to Markle, he also knows what to do with the ingredients. A source says Harry and the avid foodie “have learned a lot of new dishes together.”

The do make it out of their love nest, though: Among their go-to spots are rustic gastropub the Sands End and swanky members-only club Soho House, where mutual friend and creative director Markus Anderson introduced them last June. “They genuinely enjoy going to restaurants, being outdoors and experiencing new places,” says a source of the pair, who recently saw Oscar-nominated film Hidden Figures at a luxury movie theater in Notting Hill. And should they be spotted by an eagle-eyed admirer, that’s fine too. Says a palace aide, “They’re not trying to hide.”

The couple intend to explore more than just the streets of London. Avid travelers (they visited Norway in January to catch the Northern Lights), they often “talk about what places they want to visit,” says a source. Their dream list goes beyond standard tropical locales. Says a source: “More adventure trips!” 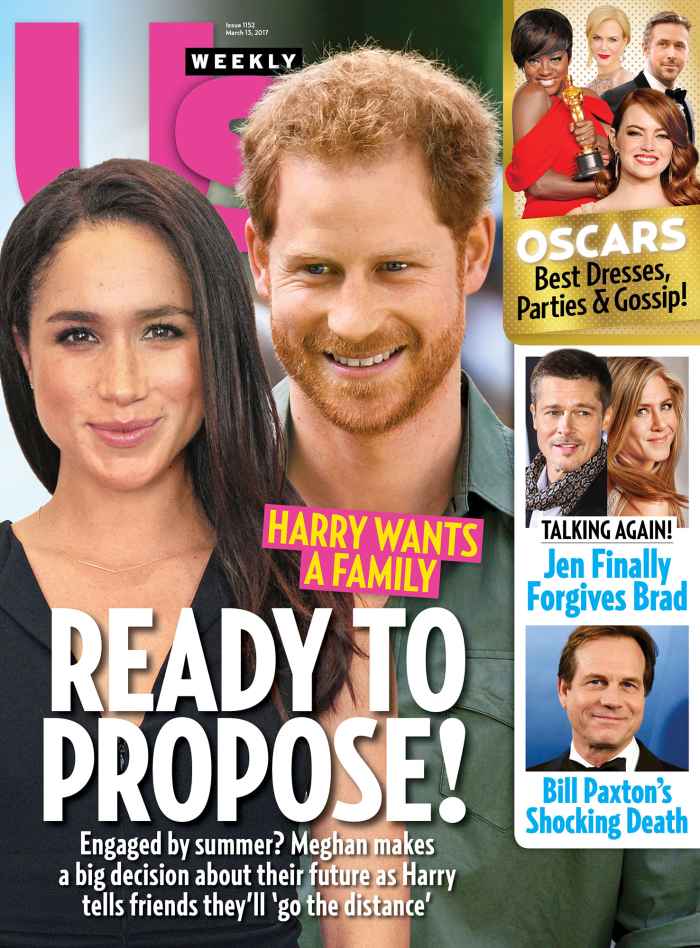 And since the early days of their romance, the pair of nine months have discussed their desire to change the world. Inspired by his mom, the late Princess Diana, Harry cofounded the Sentebale charity to help children affected by AIDS and launched the Invictus Games for wounded veterans. Markle, who serves as a global ambassador for World Vision and an advocate for U.N. Women, traveled to India in January to learn about issues facing women in the country’s more impoverished communities. As she explained on her lifestyle blog, The Tig, “This type of work is what feeds my soul, and fuels my purpose.”

The source says they’ve considered combining forces to do good: “They speak about maybe working together on a project.” The timing is right for Markle, who’s “ready to move away from acting,” explains a Markle insider, adding that the upcoming seventh season of Suits will likely be her last. “She’s started thinking of the bigger picture.”

For more on the couple’s blossoming romance, pick up the new issue of Us Weekly, on stands now!

Big Brother's Alyssa Snider and Kyle Capener Split
Jennifer Garner Has 'No Desire' to ‘Slow Things Down’ With Love John Miller
‘Seinfeld’ Cast: Where Are They Now?
END_OF_DOCUMENT_TOKEN_TO_BE_REPLACED