This One-Piece Swimsuit Is So Flattering, You’ll Never Want to Take it Off
This Family-Friendly Virtual Pet Game Will Be The Next Hit Of Your Household!
This Affordable Kaftan From Amazon Is Giving Us Serious Zara Vibes
END_OF_DOCUMENT_TOKEN_TO_BE_REPLACED

It was love at first sight. Shortly after emigrating from his native Ukraine, Maksim Chmerkovskiy was visiting family friends in New York’s Long Island, when he happened to drive past Oheka Castle. “I thought it was very Gatsby-esque,” the professional ballroom dancer recalls in the new issue of Us Weekly of spying the 109,000-square-foot French-style chateau. “I remember I wanted to strive for the ability to organize a wedding in a place like that.”

When that dream came true, at 7:30 p.m. on Saturday, July 8, the 37-year-old couldn’t keep his emotions in check. Waiting for his bride, fellow Dancing With the Stars pro Peta Murgatroyd, to join him under the lisianthus- and hydrangea-covered chuppah, the Tom Ford-clad groom started crying as soon as he heard the first strains of Tchaikovksy’s Nutcracker Suite. (The arrangement was a nod to Murgatroyd’s 16 years of ballet training, but Chmerkovksiy says he’s also a “ginormous fan.”)

When Murgatroyd’s mom, Suzanne, walked down the petal-strewn aisle carrying the couple’s 6-month-old son, Shai, “I lost it,” admitted Chmerkovskiy. But that was nothing compared to his first glimpse of Murgatroyd in an ivory, pearl-encrusted Karen Sabag Couture ball gown, cathedral-length veil and heels she purchased during their first visit to Ukraine in 2012. 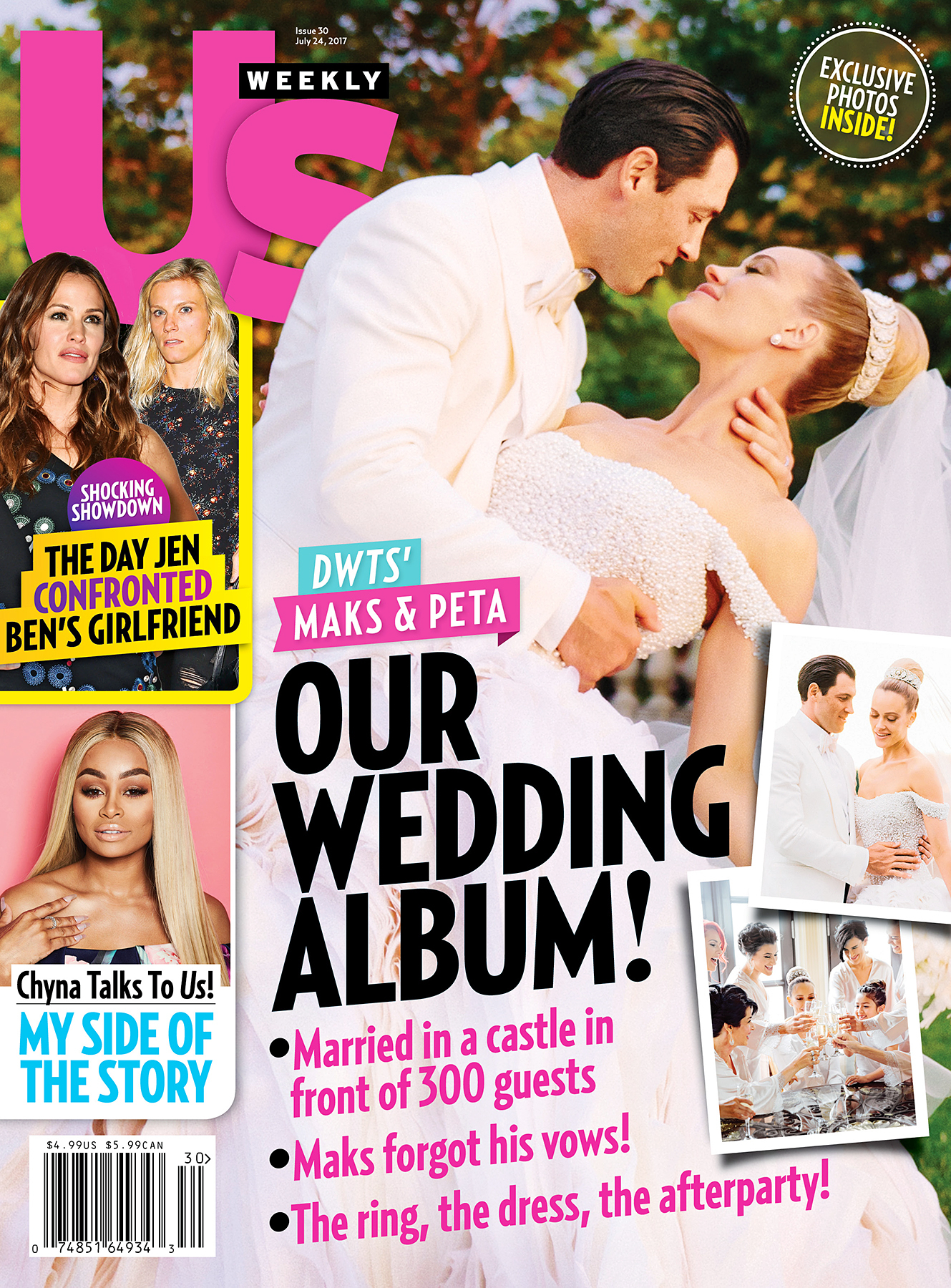 “By the time she appeared, I was so emotional, I didn’t care what it looked like,” he says of his tears. (Murgatroyd cops to avoiding eye contact with dad Derek: “I would have had no makeup left!”) As alumni of the ABC reality show — including Candace Cameron Bure, Nyle DiMarco, Chmerkovskiy’s best man and bother Val and Amsale-clad bridesmaids Rumer Willis and Sharna Burgess looked on — the duo’s close friend Greg Havio led a 30-minute nondenominational ceremony that they wrote themselves. “It has both of our cultures mixed in together,” says Murgatroyd, who performed the Jewish tradition of walking around her groom seven times.

For the grand finale, the pair, whose on-off relationship spanned five years and include a dramatic onstage proposal in December 2015, exchanged self-penned vows. Chmerkovskiy admits his delivery was rocky. “People were telling me, ‘You’re going to see her walk down and you’re going to know exactly what to say,’” he says. “What they didn’t say is, ‘You’re going to see her, freeze up and forget what you wanted to say.’” But his words still touched the New Zealand native, 31.

“It was beautiful; he made me cry,” gushes Murgatroyd, who says she spoke about wanting to be with him “until we’re old in a rocking chair together.” Then, as they sealed their union with a kiss, “a giant rainbow came out,” says Chmerkovskiy. “People lost their s–t!” Echoes his bride, “I couldn’t believe it when I turned around. It was amazing — perfect timing.”

For more exclusive photos — and details on the pair’s raucous reception — pick up the new issue of Us Weekly, on stands now!

This One-Piece Swimsuit Is So Flattering, You’ll Never Want to Take it Off
This Family-Friendly Virtual Pet Game Will Be The Next Hit Of Your Household!
This Affordable Kaftan From Amazon Is Giving Us Serious Zara Vibes
END_OF_DOCUMENT_TOKEN_TO_BE_REPLACED