Oh, Baby! Meghan Trainor Is Pregnant, Expecting 2nd Child With Daryl Sabara
21 Zara-Style Winter Fashion Finds — All Under $40
Pedro Pascal Through the Years: From 'Game of Thrones' to 'The Last of Us'
END_OF_DOCUMENT_TOKEN_TO_BE_REPLACED

Meghan Markle was once quizzed on her British knowledge on UKTV, long before she and Prince Harry announced their engagement.

While promoting her TV drama Suits in the U.K. in June 2016, the 35-year-old American actress tested her “Britishness” with a series of questions about common English phrases, historical facts and more.

“In Cockney rhyming slang, what does ‘apples and pears’ mean?” Markle read aloud off a question card before quipping, “I feel like I’m being taken down a rabbit hole here! … I really have no appropriate answer for that.”

After finding out the answer was “stairs,” the brunette beauty exclaimed, “Oh! Stairs, apples and pears. I’ll say that today.” 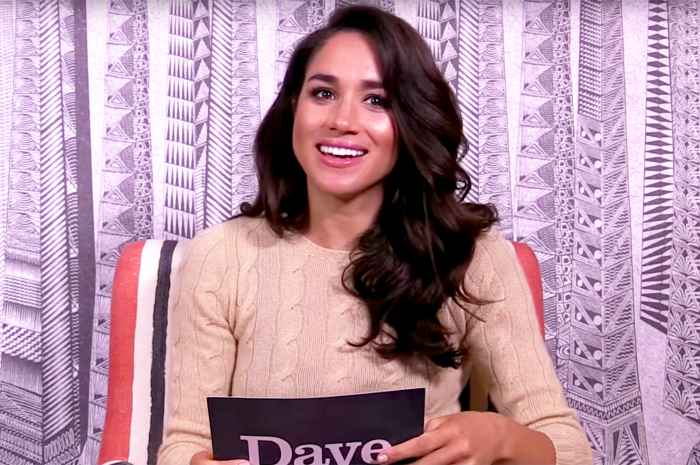 Next, Markle was asked to identify the national animals of England, Scotland and Wales, but was stumped on the answers for all three countries. “Am I supposed to know that?” she asked. The correct responses were a lion, unicorn and dragon, respectively. “Are these real right now? Lions and unicorns and dragons, oh my!” she joked.

Finally, the Fringe actress was asked to translate six common American words to British slang — chips, highway, sidewalk, trash can, pants and costumes — but she only got half correct.

“Crisps are chips,” she said, reading the answers off the card. “Highway is the motorway … that I didn’t know. Sidewalk is a path — that actually sounds really romantic. Take a little stroll down the path!” (Take notes, Harry!)

“Trash can is the bin, I got that one,” Markle continued. “Pants are trousers — yes! And costumes mean fancy dresses, very appropriate for Suits.”

At the end of the game, the Los Angeles native quipped, “I think I lost. I was the worst at this game.”

As Us Weekly exclusively reported, Prince Harry, 32, started texting Markle regularly in June. Earlier this week, they opened up about their relationship in their first joint interview together. They are set to tie the knot at St. George’s Chapel at Windsor Castle in England in May 2018.

Oh, Baby! Meghan Trainor Is Pregnant, Expecting 2nd Child With Daryl Sabara
21 Zara-Style Winter Fashion Finds — All Under $40
Pedro Pascal Through the Years: From 'Game of Thrones' to 'The Last of Us'
END_OF_DOCUMENT_TOKEN_TO_BE_REPLACED