Sarah Michelle Gellar Admits Her and Freddie Prinze Jr.’s Parenting ‘Expectations Are a Little Higher Than Most’
Shoppers Say This Is the Softest Cardigan You’ll Ever Own
La Adelita Tequila: The Hottest New Drink in Aspen
END_OF_DOCUMENT_TOKEN_TO_BE_REPLACED

The E! News personality, 31, broke the news to fans in an Instagram Story on Friday, August 9. “I know many of you have been curious about the current status of mine and Brendan’s relationship,” she began. “Many of you got to know us and our story through the show, and feel connected to us, and for that, we are forever grateful.” 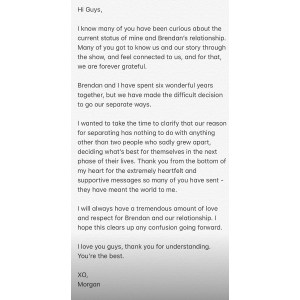 She continued: “Brendan and I have spent six wonderful years together, but we have made the difficult decision to go our separate ways.”

A source tells Us Weekly that the duo’s breakup took place earlier this summer. Fitzpatrick, 30, shared a photo of himself via Instagram at a wedding sans his wife in early July, sparking split rumors.

Four months prior, Page Six reported that Stewart had been accused of having an “inappropriate relationship” with married E! executive Bryce Kristensen.

Stewart and Kristensen both denied the claims to the publication, with a rep for Stewart giving a statement on her behalf: “Bryce and I have known each other since the beginning of my career and have been nothing more than friends and colleagues.”

Kristensen gave Page Six a similar statement: “Morgan and I have been friends and colleagues for years, and nothing more than that.”

The journalist seemingly addressed the infidelity allegations on Friday, writing, “I wanted to take the time to clarify that our reason for separating has nothing to do with anything other than two people who sadly grew apart, deciding what’s best for themselves in the next phase of their lives.”

She concluded with well-wishes for her ex, writing, “I will always have a tremendous amount of love for Brendan and our relationship. I hope this clears up any confusion going forward.”

The twosome exchanged vows on May 7, 2016. She told Us in April: “I’m excited to be married to somebody so great.”

Sarah Michelle Gellar Admits Her and Freddie Prinze Jr.’s Parenting ‘Expectations Are a Little Higher Than Most’
Shoppers Say This Is the Softest Cardigan You’ll Ever Own
La Adelita Tequila: The Hottest New Drink in Aspen
END_OF_DOCUMENT_TOKEN_TO_BE_REPLACED