Roseanne Barr was a living nightmare for the cast and crew on the set of her short-lived talk show, The Roseanne Show, a source reveals exclusively in the new issue of Us Weekly.

Back in 1997, Michael and Roger King of King World Productions were looking to expand their TV empire. They set their sights on Barr, now 65, who had just wrapped up the series finale of Roseanne’s original run. The Kings had to overlook a few red flags along the way, though.

“As part of her contract, Roseanne demanded that the King brothers buy her a house in Lake Arrowhead, on top of her $5 million yearly salary,” the source, who worked behind the scenes on The Roseanne Show, tells Us. “The brothers thought this was outrageous, but wanted to keep Roseanne happy, so they agreed.”

The syndicated show premiered in September 1998. But the jubilant mood on set didn’t last once negative reviews began coming in. Barr blamed everybody but herself for the program’s missteps, the source recalls.

“It wouldn’t be unusual for Roseanne to call one department, swearing about the crew and lack of support from the King brothers, and demeaning the work that was trying to be done to give her positive press,” the insider tells Us, noting that the host would often cancel interviews last-minute and refuse to be photographed by major news outlets.

The alleged verbal abuse only got worse. Barr began “leaving minutes-long messages at all hours of the night,” the source says. “She would tell us the infomercial she was watching was better than her show and that we were ruining her life.”

Eventually, The Roseanne Show came to an end. It aired its final episode in June 2000 to little fanfare.

Nearly 20 years later, the comedian found herself in hot water again when she called former Barack Obama adviser Valerie Jarrett the child of “muslim brotherhood & planet of the apes” in a since-deleted tweet. She apologized after facing backlash, but it was too late. ABC canceled the reboot of Roseanne on May 29 despite rave reviews about the first season. Barr later claimed that she had been “ambien tweeting.”

For more on Barr’s tweetstorm and behavior on past shows, pick up the new issue of Us Weekly, on stands now. 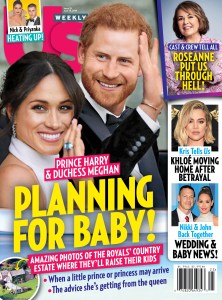 Get the latest news about your favorite TV shows by subscribing to our podcast Watch With Us below!