Game? What game? Several members of an Arizona State University sorority stole the spotlight at an Arizona Diamondbacks vs. Colorado Rockies game on Wednesday, Sept. 30, when the camera caught them snapping an inordinate number of selfies — all at the same time.

In a video that has since gone viral, a sports announcer calls out eight Alpha Chi Omega sisters who have their faces buried in their phones, busy taking selfies during the bottom of the fourth inning rather than watching the game.

“Every girl in the picture is locked into her phone,” the announcer says in the clip. “Every single one is dialed in. Welcome to parenting in 2015.” 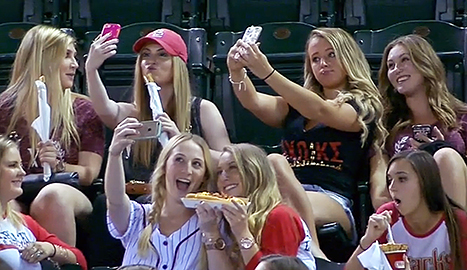 The cameras then reveal the women making duck faces and posing with churros and hot dogs in hopes of catching the perfect shot, totally oblivious to the commentary.

Later in the night, the Diamondbacks caught wind of the hilarious footage and had the sorority sisters post a selfie on the team’s official Twitter and Snapchat accounts. 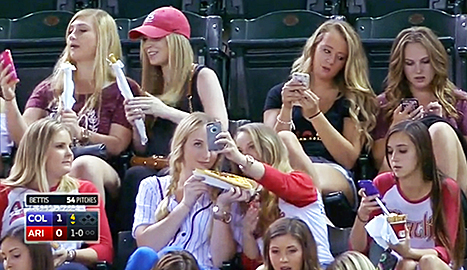 On Thursday, the Arizona Diamondbacks and Fox Sports offered members of the sorority tickets to their game that evening, but the sorority politely declined.

“Alpha Chi Omega at Arizona State University would like to thank the Arizona Diamondbacks and Fox Sports for reaching out to the chapter after last night’s game and subsequent media frenzy,” the chapter posted on Facebook. “However, instead of chapter members attending the game, we have asked the Diamondbacks and Fox Sports to provide tickets to a future game for families at A New Leaf, a local non-profit that helps support victims of domestic violence.”