“Savannah was disgusted,” a source reveals in the new issue of Us Weekly. “She feels Megyn has done significant damage to the viewers because so many were alienated.”

The controversy — which forced NBC to pull the plug on the often-abrasive host’s Megyn Kelly Today show October 26 — comes at the end of an already disastrous year at Today: Last November, Matt Lauer was fired over sexual misconduct allegations.

Stars Who Were Fired From Their Jobs 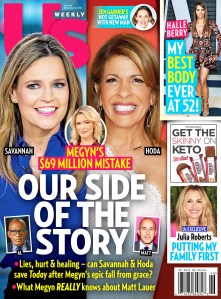 “Savannah wants Today to not be the news,” says the show insider. “She feels bad for Megyn for losing her job, but this is bigger than that.” And for Kotb, it’s all about the audience. “She’s saddened that anyone at home saw that moment on TV,” says the insider. “It was unacceptable.”

For more on how Today’s anchors are working to save the morning show, watch the video above and pick up the new issue of Us Weekly, on newsstands now!