This One-Piece Swimsuit Is So Flattering, You’ll Never Want to Take it Off
This Family-Friendly Virtual Pet Game Will Be The Next Hit Of Your Household!
This Affordable Kaftan From Amazon Is Giving Us Serious Zara Vibes
END_OF_DOCUMENT_TOKEN_TO_BE_REPLACED

It’s the ending that The Royals fans deserve! Alexandra Park, who portrayed Princess Eleanor Henstridge in the E! drama, opened up exclusively to Us Weekly about how she thinks the show should have ended, had it gotten a proper wrap up. The show was canceled after season 4, due to multiple allegations made against creator Mark Schwahn.

“I think that it was a real shame that we didn’t get to finish the story off. I would say that Jasper and Eleanor ended up on the throne and Willow and Robert found their place somewhere else and we all lived happily ever after,” she said on the “Watch With Us” podcast, recorded at the ATX TV Festival earlier this month. “The goodies were supposed to win. They didn’t, but in my mind, they did!”

Park, 30, was at the festival promoting Everyone Is Doing Great, a new series created by James Lafferty and Stephen Colletti, about actors trying to find their way years after a successful show wrapped.

During the podcast, Park revealed that since the show ended, she has really been able to find herself.

'One Tree Hill' Cast, Then and Now

“I’ve been doing a lot of growing myself lately, and it’s in these moments where the light’s not on you and you’re not running around so busy that you can’t even tell who you are – it’s in those quiet moments that are the hardest … if you can change the way you look at those moments. Instead of looking at them as helplessly and hopelessly, instead looking at them as a time to grow and a time to create,” she told Us. “Just try and focus on stripping away all of the frills, bells and whistles, and expectations and comparisons and all of those scary things out there. Just bring it down to if you want to create things, just create.”

Lafferty, 33, who also directs and stars the series, also opened up about balancing his personal life and career – especially with social media. 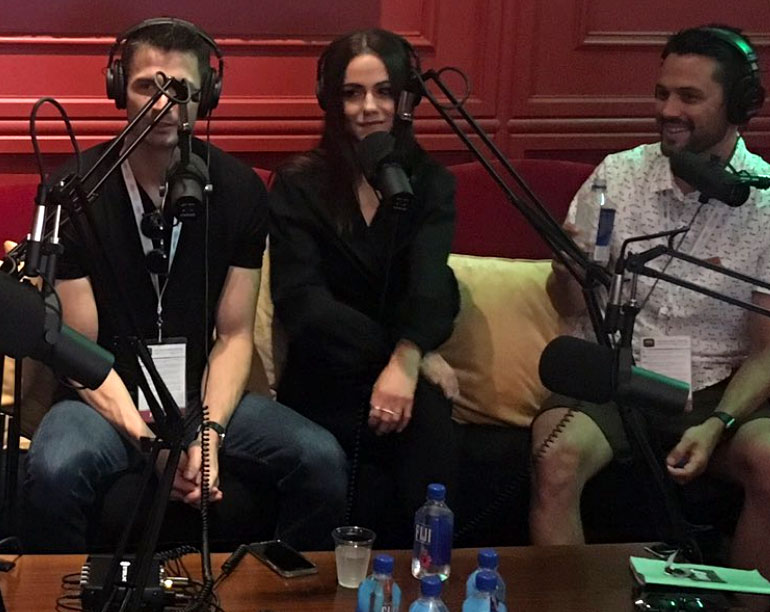 “Social media has just thrown a monkey wrench into everything, I feel like,” Lafferty said. “There’s a much higher expectation of your performance in personal relationship and professional relationships because of social media. You’re expected to engage with people that you’re working with. That didn’t exist seven, eight years ago. It didn’t exist to this extent even two or three years ago. I think it’s continuing to get worse and worse. It adds an element of pressure to make sure you are servicing every single aspect in reality and in the digital space of everybody that you work with, everybody you have ever worked with. It’s odd and bizarre.”

Park then noted that it’s tough to keep up with the ever changing social media world: “If you just want to have a little minute away from it all, because you’re feeling a little bit claustrophobic or terrified by the social media world, you may as well have dropped off the face of the Earth.”

Listen to the full podcast above and subscribe for free here for more exclusive interviews and TV news.

This One-Piece Swimsuit Is So Flattering, You’ll Never Want to Take it Off
This Family-Friendly Virtual Pet Game Will Be The Next Hit Of Your Household!
This Affordable Kaftan From Amazon Is Giving Us Serious Zara Vibes
END_OF_DOCUMENT_TOKEN_TO_BE_REPLACED
Close widget