One bangin’ Sunday! It was a big night for Ariana Grande, Nicki Minaj, and Jessie J on Sunday, Aug. 24, when they performed at MTV’s 2014 Video Music Awards and later premiered the music video for their collab “Bang Bang.”

The three celebrated performers took the stage at The Forum in Inglewood, Calif. to open the VMAs, performing a medley of their own singles and their new hit.

Directly after the big show, MTV premiered the “Bang Bang” video, one month after the track first made its debut. The retro-inspired clip (with shades of the ’60s and ’70s) opens with shots of New York City, as Grande, 21, applies makeup and prepares for a performance. 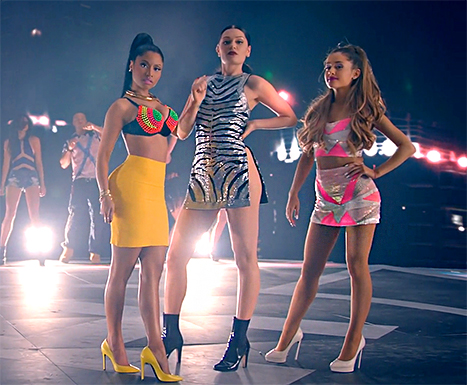 Minaj, 31, then enters a shot, strutting in stilettos and leopard print as she climbs into a helicopter. The song’s leader, Jessie J, 26, makes her appearance on a steamy NYC street, driving down a busy thoroughfare in a hot rod.

Dancing with the women on the street, Jessie belts, “She got a body like an hourglass / But I can give it to you all the time / She got a booty like a Cadillac / But I can send you into overdrive / See anybody could be bad to you, you need a good girl to blow your mind, yeah.”

The trio of women then break it down in respective scenes while performing the chart-topping single. “Bang Bang” is the first cut off of Jessie J’s upcoming studio album Sweet Talker, due out in October.

PHOTOS: MTV VMAs 2014: All the Best and Craziest Moments