Scoop up Amazon's Most In Demand Pull Up Sweater for 46% off!
Jennifer Aniston’s Facialist Compared This Mascara to Having Lash Extensions
Scoop Up the Foot Massager Kris Jenner Gifted to Her Daughters — $120 Off!
END_OF_DOCUMENT_TOKEN_TO_BE_REPLACED

Where Gilmore Girls leads, we will follow, and on Wednesday, October 5, that meant a real-life Luke’s Diner. For the 16th anniversary of the beloved show, 200 coffee shops across the country transformed into pop-ups of the Stars Hollow restaurant for one day only, and Us Weekly was on the scene in New York City at a busy location of local chain the Bean.

Even though the Manhattan spot’s baristas were much friendlier than curmudgeonly Luke Danes (Scott Patterson, who actually visited a Los Angeles location on October 5), the temporary diner still maintained a few authentic touches. Read on for how our expectations stacked up against reality of the November 25 launch of Netflix’s four-episode Gilmore Girls: A Year in the Life revival.

No matter what time of day, Luke usually had a scowl on his face and no time for shenanigans throughout Gilmore Girls’ seven-season run, which ended in May 2007. Even though the restaurateur would appreciate the facsimile’s brisk business, the hundreds of people waiting in line for a cup of free coffee would be dismissed faster than Taylor’s “cart, kiosk, cart/kiosk” town meeting rant.

The pop-up had been in full force for an hour and a half by the time we reached the counter, but the baristas were still having fun and being nice to everyone while handing out free coffee. And, yes, they were wearing flannels, backward Luke’s baseball caps and jeans — the unofficial uniform of Luke’s Diner. If we sat around the shop all day, they probably would have refilled our cups, too, and not cut us off like Luke often does to Lorelai Gilmore (Lauren Graham). 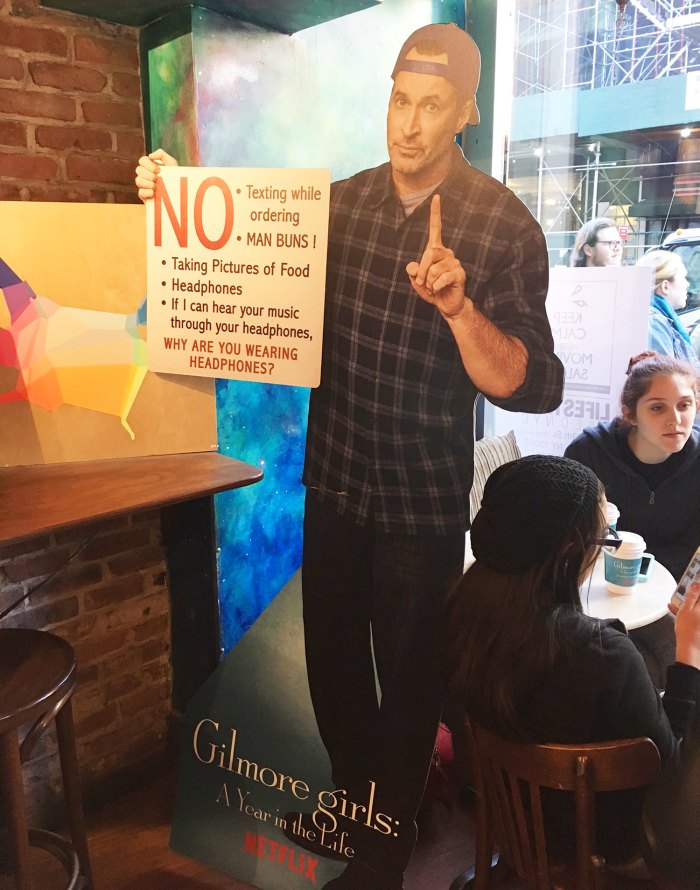 Luke displays his disdain for cellphones — flip phones in season 1, and iPhones in the revival — proudly, and the only exception is when Lorelai is making herself “No. 1” on his speed dial.

Reality: Do It for the ‘Gram

I wore this dress because I feel like Lorelai would wear it and also because “Petey, gorgeous Petey!” Check @cookingchannel’s Instagram story for more from the #GilmoreGirls pop-up!

Let’s be honest: We didn’t go to the pop-up for the coffee — we did it for the photos. If you don’t snap a picture of the Luke’s Diner coffee sleeve or the life-size cutout of the man and his rules against headphones and man buns, did it even happen? 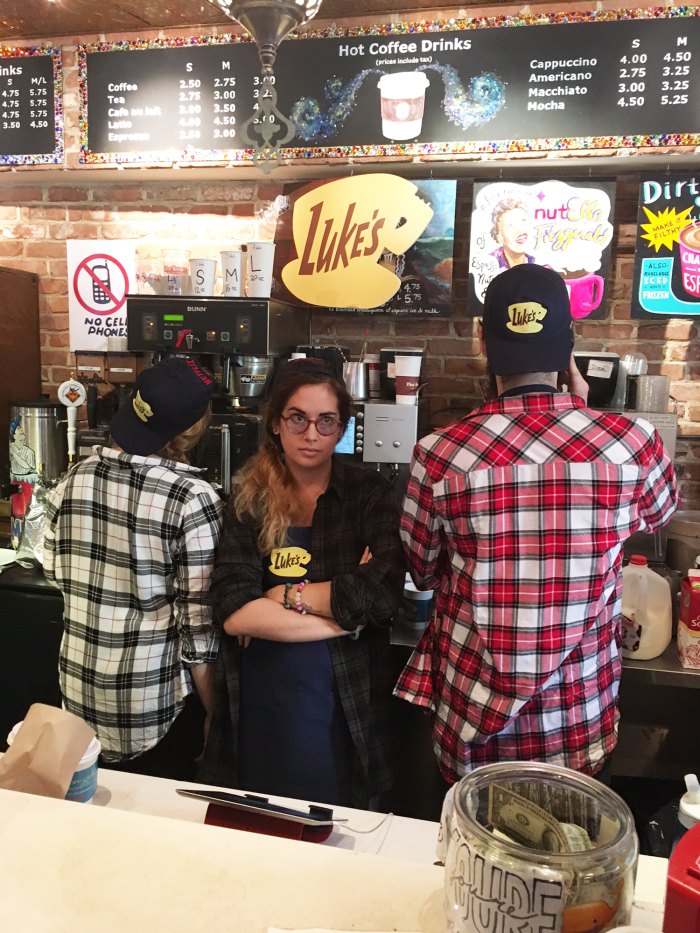 Lorelai and Rory (Alexis Bledel) were at Luke’s daily, bonding, eating pancakes and talking a mile a minute, and Lorelai’s coffee addiction eventually led her to falling in love with Luke.

There were a few cool moms and even a grandma or two at this version of Luke’s, but no one willing to sit down and make snappy jokes about Human Kirk (Sean Gunn) and Cat Kirk.

Sadly, the cute barista did not tell Us he was “all in,” but there was a rousing debate about Team Jess vs. Team Logan vs. Team Dean (psst, everyone booed for Dean and cheered for Jess).

But at the end of the day, we have our coffee, and Gilmore Girls is coming back next month, so what more do we need?

Gilmore Girls: A Year in the Life premieres on Netflix Friday, November 25.

Scoop up Amazon's Most In Demand Pull Up Sweater for 46% off!
Jennifer Aniston’s Facialist Compared This Mascara to Having Lash Extensions
Scoop Up the Foot Massager Kris Jenner Gifted to Her Daughters — $120 Off!
END_OF_DOCUMENT_TOKEN_TO_BE_REPLACED