Over it! Miss Piggy isn’t exactly mourning the end of her decades-long relationship with costar and former love Kermit the Frog. As seen in the exclusive video above, the Muppets star recently shared a list of her five greatest loves — and Kermie isn’t on it!

In fact, Piggy ranks diamonds (princess cut, natch) and books (particularly her own) above her amphibian ex-boyfriend. She also adores her dog, FooFoo — although less so when he’s barking.

No. 2 on her list? Her newly reinstated bachelorette status. “I know, you want me to say Kermit. But I’m not gonna!” she declares. “No, that chapter of my life is ooooover. I love being single! It’s great to finally be able to kiss a guy who doesn’t taste like flies.” 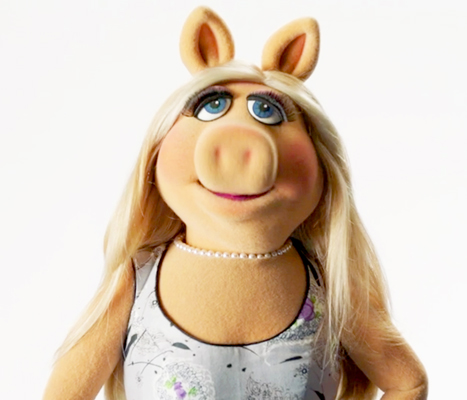 Ouch, right? Don’t feel too bad for Kermit, though — he’s already moved on to another pretty porcine. As reported earlier this month, the “Rainbow Connection” crooner is dating a pig named Denise, who works in ABC’s marketing department.

Presumably, the two met when Kermit and his fellow Muppets started working on their new ABC primetime show, which costars Miss Piggy. “It can be tough to work with your ex, especially if your ex is a pig,” Kermit admitted in a statement after their split.

He added, however, that they were trying to keep things amicable. “It is entirely professional,” he said. “I am taking a behind-the-scenes role in Piggy’s show as the executive producer. We’re both professional adults. I think we’ll be fine.”

Watch the video above to find out Miss Piggy’s No. 1 all-time love! And tune in to the series premiere of The Muppets on Tuesday, Sept. 22, at 8 p.m. ET.