Get Your Glow On With These 10 Spring and Summer Must-Have Beauty Products
‘Vanderpump Rules’ Reunion Taping Postponed: 7 Questions We Need Answered at the Reunion
Stars Affected by the Coronavirus Pandemic: Tom Hanks, Orlando Bloom and More
END_OF_DOCUMENT_TOKEN_TO_BE_REPLACED

Not-so-bad-for-you nachos? We’re in! Orange is the New Black star Alysia Reiner opened up her surprisingly spacious New York City kitchen to Us Weekly to demonstrate her take on nachos and a side of guac that are both healthy-ish! Watch the video above from our Inside My Kitchen series to see how it’s done.

Celebrities in the Kitchen: Stars Who Love to Cook! 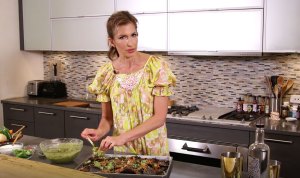 So how does one go about making everyone’s favorite comfort food a little bit better for you? According to Reiner, you’ve got to hide a little bit of green in there!

“I made these kale chips, they’re so easy to make, I happen to have a dehydrator, you can also make them in an oven. But you can also buy kale chips pretty much anywhere now,” the actress explained. “What I do is I hide the kale in the [blue corn] chips. You don’t see any green, right? What green?”

Celebs Stuffing Their Faces At the Beach

She topped the mix of chips with a ton of organic veggies including tomatoes, onions, jalapeños and cucumber. For protein, she went with BPA-free black beans, and of course, no nacho is complete without some Mexican cheese!

For another healthy twist, Reiner topped the nachos with fat-free Greek yogurt instead of the standard nacho staple – sour cream. “You’re adding the probiotics. It’s a way to do a little bit of secret health for your family. So, never feel guilty when eating nachos!”

The New York City native moved to her Harlem apartment over 10 years ago with her husband David Alan Basche and they now share it with their 9-year-old daughter, Livia. While it’s a total dream kitchen today with high-ceilings, a custom bar and chic modern cabinetry, that wasn’t always the case!

“My kitchen used to be a crack house!” she told Us while showing old crack vials she saved from when they first moved in. “It was bad news – no windows, no doors, no electric, no plumbing and no roof. We made it into my dream house!”

Check out her gorgeous kitchen and see her cooking in action in the video above. Plus, catch Reiner as fan-favorite Fig on Orange is the New Black season 6 streaming now on Netflix, and in her debut season as Kiki Rains in The Deuce on HBO September 9. 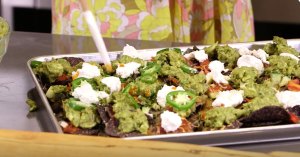 Get Your Glow On With These 10 Spring and Summer Must-Have Beauty Products
‘Vanderpump Rules’ Reunion Taping Postponed: 7 Questions We Need Answered at the Reunion
Stars Affected by the Coronavirus Pandemic: Tom Hanks, Orlando Bloom and More
END_OF_DOCUMENT_TOKEN_TO_BE_REPLACED