Jessica Simpson 'Felt Like a Call Girl' Amid Secret Affair With Movie Star
John Legend: How My Kids With Chrissy Teigen Adjusted to New Baby
You Love Dolly Parton’s Music, but Have You Read Her Books?
END_OF_DOCUMENT_TOKEN_TO_BE_REPLACED

Timeless style! After wowing in red, Duchess Kate switched to green while touring the University of British Columbia’s Okanagan campus on Tuesday, September 27. But her outfit was missing one major detail.

The Dolce & Gabbana Pocket Watch-Appliqué Crepe Midi Dress ($3,545, matchesfashion.com) includes gold buttons down the front, a bow-tied collar and a massive timepiece accent on the right side of the neckline. The watch was noticeably absent from the Duchess of Cambridge’s version of the ensemble, which she paired with a nude L.K.Bennett clutch and heels and Monica Vinader Siren Wire earrings ($190, monicavinander.com). 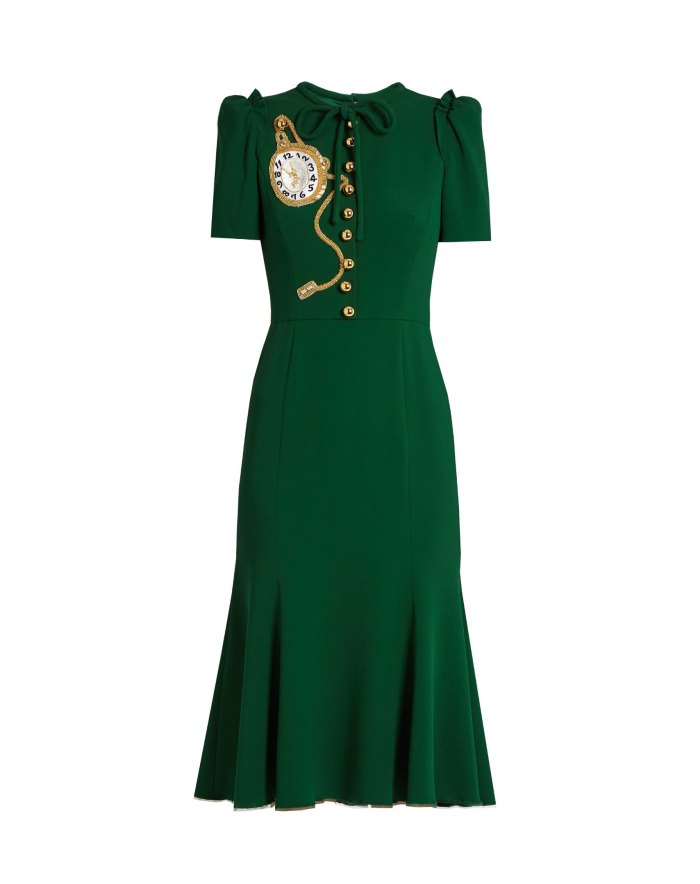 Middleton, 34, and her husband, Prince William, attended a volleyball match at the university on day four of their eight-day tour of Canada. The royal couple rooted for the home team along with 1,000 students in the campus gymnasium. As they walked in, an announcer declared to a burst of applause, “Please welcome, all the way from the U.K., standing at 6-foot-3-inches and 5-foot-9-inches — or 5-foot-11-inches including high heels — the Duke and Duchess of Cambridge!”

The parents of George, 3, and Charlotte, 16 months, were feeling so much school pride that they even decided to meet the team’s mascot, Scorch. “I didn’t expect them to talk to me, they were very nice,” the mascot, who resembled a live fire, told Us Weekly of his experience. “They said Prince George would love to meet me.”

Afterward, the Duke and Duchess of Cambridge took in the regional cuisine of British Columbia at a nearby vineyard, Mission Hill Winery.

Jessica Simpson 'Felt Like a Call Girl' Amid Secret Affair With Movie Star
John Legend: How My Kids With Chrissy Teigen Adjusted to New Baby
You Love Dolly Parton’s Music, but Have You Read Her Books?
END_OF_DOCUMENT_TOKEN_TO_BE_REPLACED