Jessica Simpson 'Felt Like a Call Girl' Amid Secret Affair With Movie Star
John Legend: How My Kids With Chrissy Teigen Adjusted to New Baby
You Love Dolly Parton’s Music, but Have You Read Her Books?
END_OF_DOCUMENT_TOKEN_TO_BE_REPLACED

In the 72 hours after Brad Pitt’s wife of two years, Angelina Jolie, blindsided him by filing for divorce September 19, newspapers and gossip blogs rushed to paint him as an angry, unfaithful villain. The person allegedly behind the reports: his wife. People in Jolie’s inner circle “are running a smear campaign,” a source claims in the new issue of Us Weekly. The insider adds that the negative press reports are an attempt to discredit the 52-year-old War Machine star. Find out more in the video above, and read the details below.

The most disturbing story came from TMZ September 22: The site reported that the actor — who Jolie, 41, his partner of 12 years, praised as a “wonderful father” in 2013 — became “verbally abusive and physical with his children” in front of their mother aboard a private jet September 14.

But while Jolie’s friends insist Pitt indeed has a terrible temper, Us can confirm the Maleficent star long plotted to leave him — and gain physical custody of their six children, Maddox, 15, Pax, 12, Zahara, 11, Shiloh, 10, and 8-year-old twins Knox and Vivienne.

Jolie, deeply unhappy with Pitt after years of fighting, had been quietly laying the groundwork to leave her husband. The incident on the plane — a Pitt friend admits the actor lost his temper, but insists he was not abusive — may have been the last straw. It also, however, provided her with an opportunity to get the upper hand in a custody battle and keep the kids overseas. “Angie says she is going to destroy him,” claims one Jolie friend. “If something is broken, she just throws it away.” 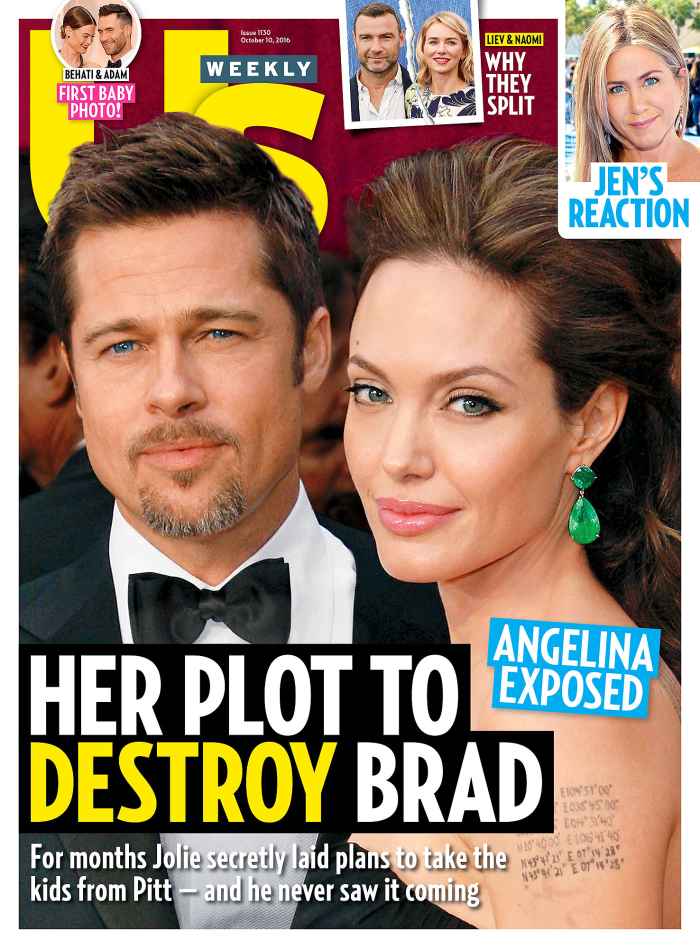 In the past year, the humanitarian had been “ramping up her efforts in the political world,” says a Jolie confidant. The United Nations special envoy for refugees aspired to turn her back on Hollywood and develop a “full-time role” in the U.K., says the source.

Two politicos she met through her humanitarian work, Arminka Helic and Chloe Dalton, both former advisers to onetime U.K. Foreign Secretary William Hague, helped her. Helic aided Jolie in nabbing a 2017 professorship at the London School of Economics.

Over the summer, the Oscar winner reportedly even rented a five-bedroom, $8.5 million home in Malibu. There, she could stay out of the spotlight after she cut the cord with Pitt.

She did just that September 19. Multiple sources confirm Jolie — who hired shrewd divorce lawyer Laura Wasser — barely gave her husband notice that she had decided to officially declare their differences “irreconcilable” and seek a divorce. “Angelina filed the papers a minute before the courts closed. He didn’t have a lawyer or anything,” says a Pitt source. “He has been crying constantly.”

Meanwhile, holed up in Malibu with the children, as well as Helic and Dalton, Jolie has blocked Pitt’s number from her phone. Pitt, who hasn’t seen the children since Jolie filed for divorce, “is a shattered man,” continues the source.

For more on Jolie and Pitt’s bitter split, pick up the new issue of Us Weekly, on stands now.

Jessica Simpson 'Felt Like a Call Girl' Amid Secret Affair With Movie Star
John Legend: How My Kids With Chrissy Teigen Adjusted to New Baby
You Love Dolly Parton’s Music, but Have You Read Her Books?
END_OF_DOCUMENT_TOKEN_TO_BE_REPLACED