The past nine months haven’t been kind to Brad Pitt. In the wake of his much-publicized split from Angelina Jolie, newspapers and gossip blogs painted him as the villain, claiming he’d had an affair with Allied costar Marion Cotillard and hired Russian hookers. And as he battled his estranged wife for custody of Maddox, 15, Pax, 13, Zahara, 12, Shiloh, 11, and 8-year-old twins Knox and Vivienne, Pitt also had to wait to be cleared of abuse allegations by the L.A. County Department of Children and Family Services and the FBI.

Still, the War Machine actor did his best to remain upbeat. “I’m not suicidal,” he said in a candid May interview with the Associated Press. “There’s still much beauty in the world and a lot of love. And a lot of love to be given.”

He just needs someone on the receiving end. Since ending his 12-year relationship with Jolie, 42, the Oscar winner has made over his life, ditching alcohol, starting therapy and examining his own flaws.
“For me this period has really been about looking at my weaknesses and failures and owning my side of the street,” he told May’s GQ Style.

Now, the 53-year-old is looking for a partner to walk at his side, says a source. Single for the first time in nearly two decades, the affable Springfield, Missouri, native “has been on a couple of dates,” says another insider. “He’s hanging out with friends and those friends are bringing him out to meet other people.” 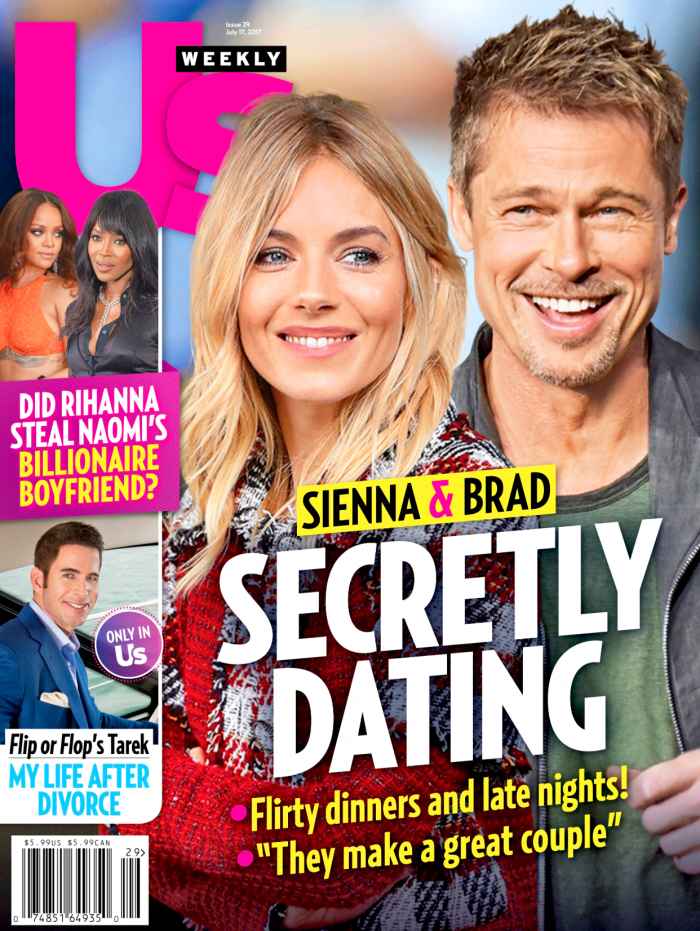 And then there are the connections he makes himself. The Pitt source confirms he’s had a few meet-ups with Sienna Miller, who starred in his 2016 biographical adventure, The Lost City of Z. Says a source of the duo — spotted hanging out at England’s famed Glastonbury Festival in the early hours of June 24 — “They’ve been spending some time together.”

The first hint of a flirtation came in early April. At a 25-person dinner for The Lost City of Z cast and crew in L.A., the actor and the 35-year-old Brit were seen chatting much of the night. They reconnected two months later on her side of the pond. When Pitt popped by Glastonbury with Bradley Cooper June 23, the pals connected with the blonde beauty, Cooper’s costar in 2014’s American Sniper.

“They are all good friends so they were hanging out,” says the Pitt insider, denying a report from Britain’s The Sun newspaper that Pitt and Miller were stroking each other and holding hands. Insists the insider of Pitt and Miller, mom to 5-year-old Marlowe with former fiancé Tom Sturridge. But should the ‘90s heartthrob want to make a move, the Pitt source sees a good future: “They would make a great couple.”

For more on Pitt and Miller, pick up the new issue of Us Weekly, on stands now!