On March 17, first lady Melania Trump, clad in a belted custom Alice Roi coatdress, Gianvito Rossi stilettos and Gucci sunglasses, strode across the White House lawn with her husband, Donald. With the press corps photographers snapping away, the 46-year-old Slovenia-born stunner smiled for the cameras as the billionaire, 70, awkwardly reached for her hand and clutched the tips of her fingers.

Once the obligatory photo op was complete, she, Donald and their 11-year-old son, Barron, boarded Marine One, POTUS’ helicopter, which whisked them away to their Palm Beach, Florida, estate, Mar-a-Lago. Aboard the chopper — and away from the public eye — Melania dropped the act. And Donald’s hand. “Melania,” a family source alleges in the new issue of Us Weekly, “does not keep hidden from everyone around her how miserable she is.”

That includes the presi­dent himself. Multiple sources claim that the former fashion model — who’s currently living 200 miles away from Washington, D.C., in NYC’s Trump Tower while Barron finishes the school year — refuses to share a bed with Donald even on the rare occasions when they sleep in the same city. “They have separate bedrooms,” says another Trump insider. “They never spend the night together — ever.” (A third source says the couple do sleep in the same room but keep separate beds: “It’s very ‘royal’ of them!”)

Upset with the former reality star for trapping her in a life she despises, “Melania wants as little to do with Donald as possible,” explains the family source. “She is not interested in Donald, the presidency or anything involving him.” A rep for Melania denies the claims, telling Us, “It’s unfortunate that you are going to feature unnamed ‘sources’ that have provided fictional accounts.” 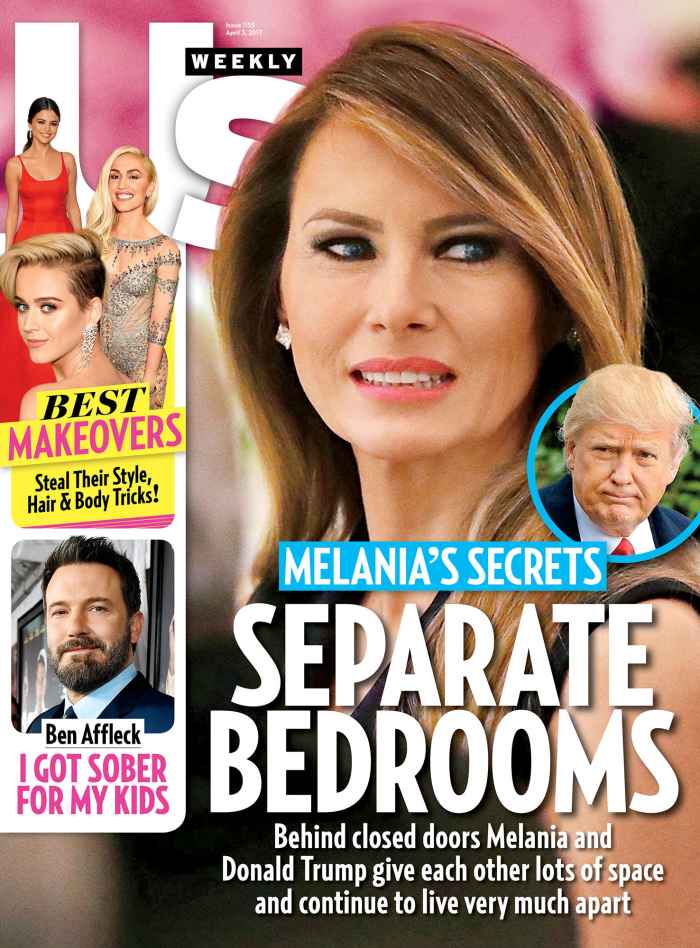 Since assuming the role of first lady January 20, Melania has kept an extremely limited official schedule. After the inauguration, she mostly stayed in her gilded Fifth Avenue triplex penthouse and didn’t set foot in the nation’s capital again for 21 days. And the few official appearances she has made were done so begrudgingly.

Melania escorted Akie Abe, the Japanese prime minister’s wife, around Palm Beach in February, but “only because she was going to be at Mar-a-Lago already,” according to the family source. “She refused to do it in Washington.”

For much more on the Trumps, pick up the new issue of Us Weekly, on stands now!