Try The Rosé All Your Favorite Stars Are Drinking During Quarantine!
Celebrities React to Claims of Ellen DeGeneres’ ‘Toxic’ Workplace: Katy Perry, Brad Garrett and More
The 5 Most Comfortable Face Masks — From Tory Burch to Amazon
END_OF_DOCUMENT_TOKEN_TO_BE_REPLACED

Gwen Stefani took to the water with boyfriend Blake Shelton and her three sons to do some fishing as the sun was rising on Sunday, July 16.

The No doubt singer dressed down in a gray sweatshirt and baseball cap, but still had her trademark red lipstick on in a series of pics and videos she posted on Snapchat.

“Good morning,” she captioned a stunning pic of the sunrise before sharing clips that showed her three sons with ex-husband Gavin Rossdale — Kingston, 11, Zuma, 8, and Apollo, 3 — goofing off with Snapchat filters and wearing red life vests on the small boat. In another video, one of the boys could be seen reeling in a fish.

Stefani, 47, also posted a shot of her boyfriend of more than a year sitting in the captain’s chair as he enjoyed the stunning view.

On Friday, July 14, the “Used to Love You” singer stopped into a nail salon in Madill, Oklahoma, and posed for a selfie with a nail technician before Snapchatting video that showed her and the kids backstage at the country singer’s concert.

Us Weekly exclusively broke the news that Shelton, 40, and Stefani, who met on the set of The Voice, were dating in November 2015 after their respective marriages fell apart. Shelton finalized his divorce from fellow country superstar Miranda Lambert in July 2015, while Stefani called it quits on her almost 14-year marriage to Rossdale the following month. 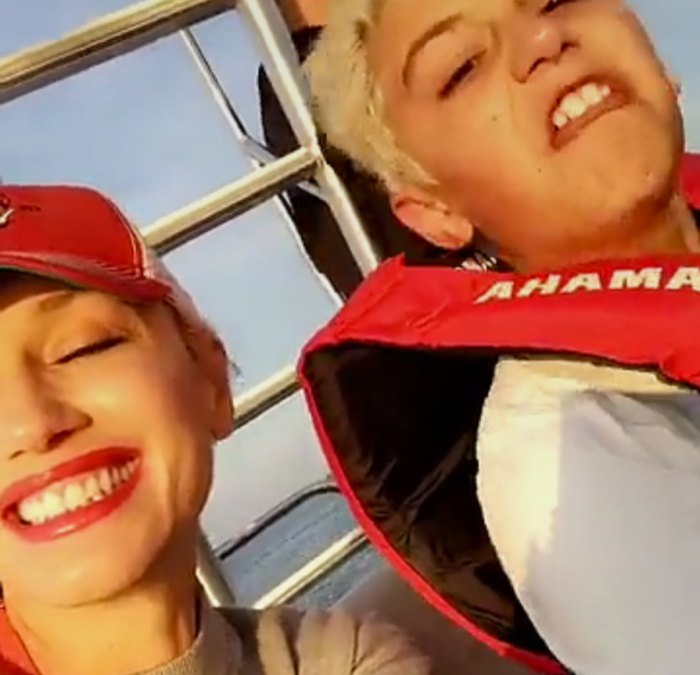 “In people’s defense, I think it’s so hard for people to wrap their head around why Gwen would want to be with me,” the “Came Here to Forget” singer said on the Today show in April. “I don’t blame ‘em.”

Try The Rosé All Your Favorite Stars Are Drinking During Quarantine!
Celebrities React to Claims of Ellen DeGeneres’ ‘Toxic’ Workplace: Katy Perry, Brad Garrett and More
The 5 Most Comfortable Face Masks — From Tory Burch to Amazon
END_OF_DOCUMENT_TOKEN_TO_BE_REPLACED