Find Out What Reviewers Are Calling the 'Best Bra Ever'
'So Happy'! Inside Selena Gomez and Drew Taggart’s ‘Amazing Connection’
Pedro Pascal Through the Years: From 'Game of Thrones' to 'The Last of Us'
END_OF_DOCUMENT_TOKEN_TO_BE_REPLACED

In an interview with 20/20 that aired on Thursday, January 19, the 35-year-old former fashion designer called Chelsea, 36, a “very good friend.” Watch what she had to say in the clip above!

The ex–Trump Organization VP intends to ask the former first daughter for some advice about the role. “She’s been a friend of mine long before the campaign, [and] of course will be a friend of mine after,” she said. “I haven’t spoken about the specific challenges about this next chapter with her just yet, but I intend to.”

PHOTOS: Bill and Hillary Clinton Through the Years

Chelsea has also asserted that they will remain pals despite political differences. “We were friends long before this election; we will be friends long after this election,” she told The View in September. “[Our friendship] certainly is not going to end because of politics. I have tremendous respect for Ivanka. I love her family. She’s a working mom like I am. We have so much more in common than we have disagreement about.”

Ivanka will officially assume the title of first daughter at noon on Friday, January 20, when her father is sworn in as the 45th president of the United States. She will attend the festivities with her husband and senior adviser in the Trump administration, Jared Kushner, and their three children, Arabella, 5, Joseph, 3, and Theodore, 9 months.

The family of five recently moved from NYC to Washington, D.C., to a six-bedroom home in the Kalorama neighborhood. Ivanka stepped down from her roles as executive vice president of development and acquisitions at the Trump Organization and head of her eponymous fashion brand to comply with ethics laws and help her family adjust to life in a new city. 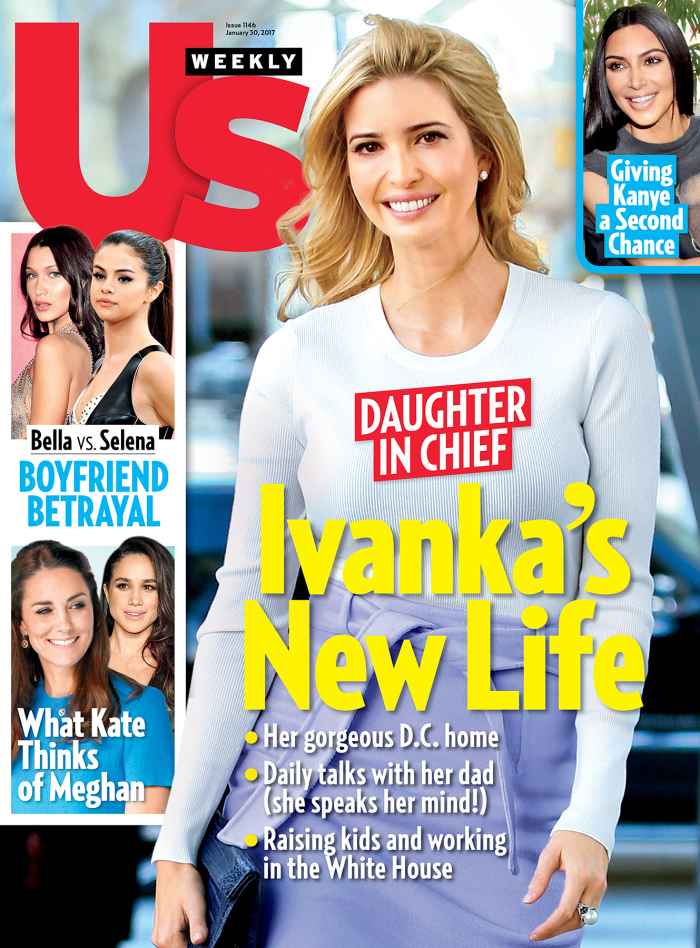 “Ivanka is focused on getting everyone settled right now and finding the kids schools,” a close insider says in Us Weekly’s latest cover story. “She wants to make this a smooth move.”

While she won’t assume an official role in her father’s administration, a close Ivanka insider tells Us that she is Donald’s most trusted adviser. “He looks to Ivanka for advice and consultation on almost everything,” the pal says.

Find Out What Reviewers Are Calling the 'Best Bra Ever'
'So Happy'! Inside Selena Gomez and Drew Taggart’s ‘Amazing Connection’
Pedro Pascal Through the Years: From 'Game of Thrones' to 'The Last of Us'
END_OF_DOCUMENT_TOKEN_TO_BE_REPLACED