Jessica Simpson 'Felt Like a Call Girl' Amid Secret Affair With Movie Star
John Legend: How My Kids With Chrissy Teigen Adjusted to New Baby
You Love Dolly Parton’s Music, but Have You Read Her Books?
END_OF_DOCUMENT_TOKEN_TO_BE_REPLACED

Jennifer Aniston isn’t going to sit quietly. In a new interview for Marie Claire’s December 2016 issue, the Office Christmas Party actress, 47, opens up about the times she’s gotten “shamed” throughout her career and for her 2005 divorce from Brad Pitt.

Aniston and Pitt, 52, were married from 2000 to 2005. “My marital status has been shamed; my divorce status was shamed; my lack of a mate had been shamed; my nipples have been shamed. It’s like, ‘Why are we only looking at women through this particular lens of picking us apart? Why are we listening to it?'” Aniston explains. “I just thought: I have worked too hard in this life and this career to be whittled down to a sad, childless human.” (Pitt is currently in the middle of divorce proceedings with Angelina Jolie.)

Back in July, Aniston slammed the constant scrutiny in an op-ed blog post for The Huffington Post.

“For the record, I am not pregnant. What I am is fed up,” she wrote at the time. “I’m fed up with the sport-like scrutiny and body-shaming that occurs daily. … If I am some kind of symbol to some people out there, then clearly I am an example of the lens through which we, as a society, view our mothers, daughters, sisters, wives, female friends and colleagues. The objectification and scrutiny we put women through is absurd and disturbing.”

Aniston’s marriage to Justin Theroux, meanwhile, has been under a microscope since the two tied the knot at their $21 million Bel Air mansion in August 2015. During her chat with Marie Claire, she opened up about why he is “the right person” for her.

“All I know is that I feel completely seen, and adored, in no matter what state,” she says. “There’s no part of me that I don’t feel comfortable showing, exposing. And it brings forth the best part of myself, because I care about him so much. And he’s such a good person. It hurts me to think of anything hurting him.” 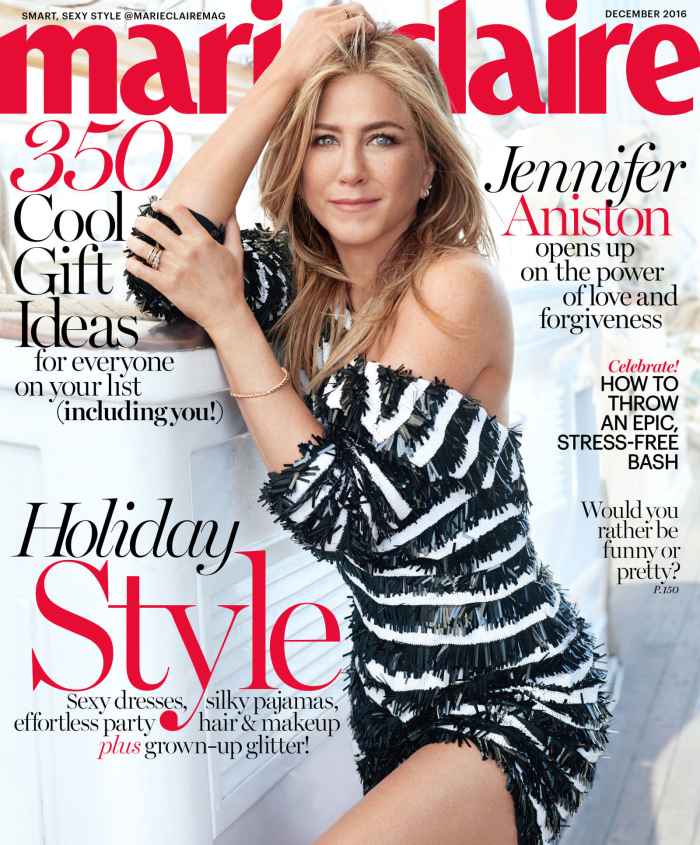 The Friends alum admits that she’s at a turning point in her career now, and that Theroux, 45, has a lot to do with the choices she makes.

“This is a time when I’m not completely sure what I’m doing. I’m at this sort of crossroads trying to figure out what inspires me deep in my core. What used to make me tick is not necessarily making me tick anymore. … The most challenging thing right now is trying to find what it is that makes my heart sing,” she tells the mag. “Especially these days, with Justin in Melbourne. It has to be worth it.” Theroux films his HBO drama The Leftovers in Australia.

Jessica Simpson 'Felt Like a Call Girl' Amid Secret Affair With Movie Star
John Legend: How My Kids With Chrissy Teigen Adjusted to New Baby
You Love Dolly Parton’s Music, but Have You Read Her Books?
END_OF_DOCUMENT_TOKEN_TO_BE_REPLACED