Bing Bellamy is as bubbly as his name!

Kate Hudson graces the October issue of Harper’s Bazaar, and opens up for one of the first times about Bingham, her 15-month-old little boy with fiance Matt Bellamy.

The Glee guest star’s younger son strikes a notable contrast with his older brother Ryder, 8, Hudson’s son with ex-husband Chris Robinson. “Ryder and Bing are polar opposites. In order to get a smile out of Ryder, you had to work really hard when he was a baby,” Hudson tells the magazine, laughing.

“Bing is just smiling–he’s happy, he’s joyous. Ryder, I knew he was going to be an artist. But Ryder is comfortable in his own skin.” 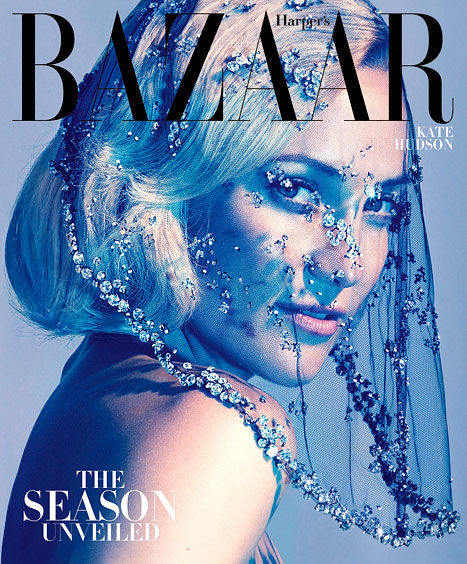 PHOTOS: Her pregnancy with Bing

Another big difference? Her pregnancies with baby boys one and two. “Bing was a more difficult pregnancy than Ryder . . .With Bing I was really nauseous. He also moved around so much that I felt like I was in Aliens. He was just rockin’ out.”

By Hudson’s side as Bing and Ryder grow up is fiance Bellamy, whom Hudson began dating in spring 2010. “He was immediately very protective and, you know, watchful,” she says of the Muse frontman.

Soon after meeting the rocker, Hudson was trying to sleuth him out. “I Googled him right away! And it was shocking, ’cause he was like two completely different people,” the Oscar nominee says.

Seeing him wow fans in concert, “I was just in awe of his ability and his talent. And then to know him on the other side of it, and how sweet and simple and loving he is,” Hudson coos, “You know how people say that when you meet somebody you love, you feel at home?”

Still, although Bellamy proposed in April 2011, the engaged couple are in no rush to wed. “We’ll do it eventually, but I want it to be right,” explains Hudson, who divorced Black Crows rocker Robinson in 2007 after seven years. “I don’t want to just do it, you know what I mean?”

The California-born star and British musician Bellamy have been splitting their family time between Los Angeles and London — where Hudson’s fellow expatriate star Gwyneth Paltrow has been an invaluable resource. “She’s been my go-to about where to get things done—grocery shopping, a good mani-pedi, you know, all that,” Hudson raves of the actress, mom and GOOP guru, 39. “I look up to Gwyneth and how she has been in her life. She’s the real deal.”