Scoop up Amazon's Most In Demand Pull Up Sweater for 46% off!
Jennifer Aniston’s Facialist Compared This Mascara to Having Lash Extensions
Scoop Up the Foot Massager Kris Jenner Gifted to Her Daughters — $120 Off!
END_OF_DOCUMENT_TOKEN_TO_BE_REPLACED

Kelly Osbourne was in pain. Catapulted into the spotlight from birth, Ozzy and Sharon’s middle child was constantly taunted by friends, fans and the media. “People would call and tell me to stop eating doughnuts because I was fat,” the TV personality recalls in the new issue of Us Weekly. “I would cry my eyes out. I hated myself.”

To numb her misery, she turned to prescription drugs. By 2002, when MTV began capturing The Osbournes, a 17-year-old Kelly was self-medicating daily “to make myself feel better.” Pills also helped her cope with physical pain: Unbeknownst to her, Kelly was suffering from undiagnosed Lyme disease.

Still, the high made her only sink lower. After four rehab stints, she finally got clean: “I realized only I could save myself.” Now, in her memoir, There Is No F*cking Secret: Letters From a Badass Bitch, an eight-years-sober Kelly details her journey in the hope that “people will know they’re not alone.” The single L.A. resident, 32, shares excerpts with Us, one of which you can hear her narrate in the clip above. 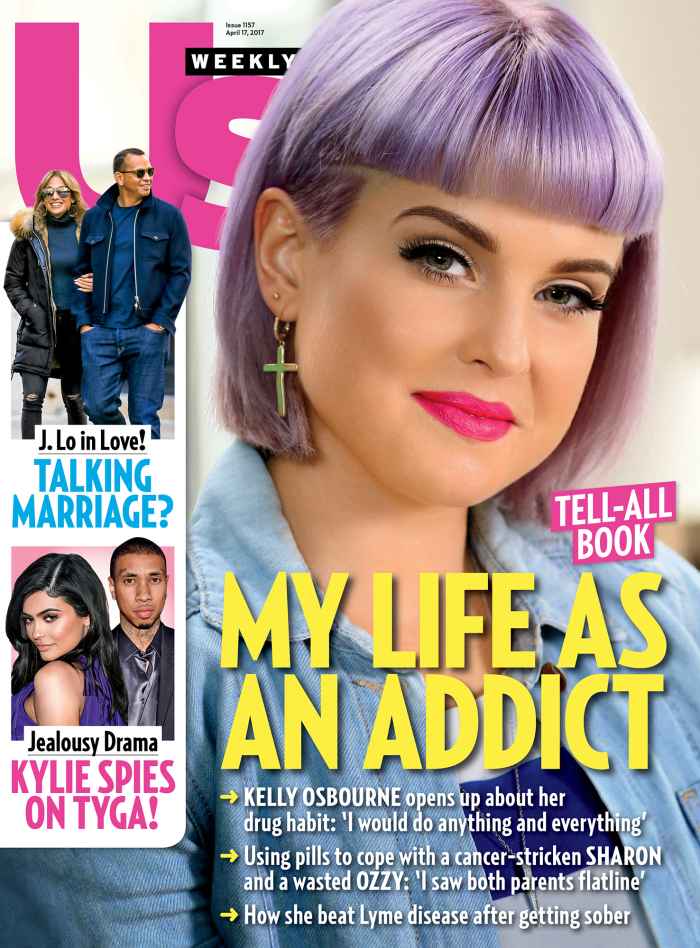 For Ozzy’s 56th birthday, in 2004, Sharon surprised him with a reindeer sanctuary in the backyard of their England home. Kelly was bitten by a tick, which Ozzy burned off with a match. Still, the bug left its mark. For a decade, Kelly suffered from “traveling pain,” she writes, from a sore throat to stomachaches, until she had a seizure while filming E!’s Fashion Police March 7, 2013. Doctors diagnosed her with epilepsy.

The doctors kept changing my prescription, trying to get the dosage right, and it turned me into a zombie. You know in movies where a mental patient sits in a rocking chair in a cardigan and nightgown and stares at a wall all day? That was me.

My prescriptions kept piling up. I couldn’t sleep, so they gave me Ambien. When Ambien made me nauseated, they switched me to Trazodone, but that gave me acid reflux, so then I had to take an antacid every day. I took cranberry extract and antibiotics because one medication made me prone to getting urinary tract infections. Painkillers — for an ex–painkiller addict — to help with the head and body aches. Not kidding — I had pills to deal with the anxiety that I was having from taking so many pills.

When I got yet another prescription that left me barely able to speak, I was reduced to a lump on the couch, and that was my breaking point. I took my bag of pills, and my fiancé [Matthew Mosshart; the two split in 2014] drove me to my mum’s house. I sat them all out, one by one, until they lined up the length of the counter. “I can’t live like this anymore,” I said. “I’m a vegetable.”

As a last resort, she called Philip Battiade at Infusio, an alternative medicine practitioner. I’d first met him when he treated my brother for MS. When I met with Philip, I assured him that I hadn’t used unprescribed drugs in years and that I thought I had Lyme disease. I had started entering my symptoms into online quizzes, and the results kept coming back Lyme disease. For the first time, someone listened to me, and I got tested. The results were positive: I had stage III neurological Lyme disease. I was relieved to finally know what was going on, but I was also scared s—tless.

I got on a plane and flew to Philip’s treatment center in Germany. I started stem cell therapy. Rather than trying to kill off the disease with antibiotics, this treatment worked to strengthen my immune system so my body could fight off and get rid of the disease on its own, which is a much more complete and lasting cure. I stayed for two weeks. I was experiencing emotions and feelings again. I’d been in a diseased and doctor-approved drug-induced haze for so long that I didn’t know what it was like to be happy or sad or in pain.

I’ve kept quiet about my Lyme disease, not only for fear of pharmaceutical companies coming after me because of the cure I found in Germany but also because it seems like the trendy disease to have right now, and I’m tired of seeing sad celebrities play the victim on the cover of weekly mags. Since I know firsthand how awfully debilitating it is, I know who really has it and who is just trying to prolong their 15 minutes. I don’t understand how anyone could think that the life you have to live with Lyme disease is glamorous.

Kelly Osbourne’s Body Through the Years

I’ve learned to advocate for myself when it comes to my health, and I trust my intuition. If I think something is wrong, I refuse to let anyone dismiss it. And sadly, I stay the f—k away from reindeer.

I was a f—ked-up ugly duckling who somehow emerged a lavender swan. I went from being the girl mums told their kids to stay away from to the girl mums follow on social media and stop in the street to ask for advice about their own daughters’ struggles. So after fielding the same question what seemed about 50 million times, I decided to write this book because: THERE IS NO F—KING SECRET!

For more from Kelly — her life as an addict, how she finally got clean and why Dancing With the Stars changed her life — pick up the new issue of Us Weekly, on newsstands now!

Scoop up Amazon's Most In Demand Pull Up Sweater for 46% off!
Jennifer Aniston’s Facialist Compared This Mascara to Having Lash Extensions
Scoop Up the Foot Massager Kris Jenner Gifted to Her Daughters — $120 Off!
END_OF_DOCUMENT_TOKEN_TO_BE_REPLACED