‘The Bachelorette’ Season 16: Everything We Know
These Denim Joggers Are Our Secret to Cool, Casual Comfort
These Stunning Ruched One-Piece Swimsuits Show Just the Right Amount of Skin
END_OF_DOCUMENT_TOKEN_TO_BE_REPLACED

Before Prince Harry and Duchess Meghan make an official visit to the U.S. in 2019, the former actress will make the journey solo.

Meghan Through the Years

“She’s planning a personal, unofficial trip this summer to see family and friends,” a source reveals exclusively in the new issue of Us Weekly. “She’ll go to New York, then L.A.”

Meghan, 36, wants to make the trip to her native country in the coming weeks before she takes on her next role, as a mother. “Expect to hear the pitter-patter of a little prince or princess in 2019,” a confidant tells Us.

Royal Wedding Photos That Make Us Believe in Love

The solo jaunt will come ahead of the newly minted Duke and Duchess of Sussex’s October tour of Australia, New Zealand, Fiji and the Kingdom of Tonga. Kensington Palace announced in June that Harry, 33, and Meghan are set to visit the neighboring countries to coincide with the Invictus Games, which will be held in Sydney from October 20 to 27.

And next spring, the prince and the Suits alum will jet off again. “They are thinking New York, Washington, D.C., and California,” another source says. “They’re working to finalize locations and venues. … The Canadian Foreign Office has heard about the tour and would love to have them stop there. This may very well become a North American tour.”

The royal pair’s schedule has been jam-packed since their May 19 wedding. They visited Dublin, Ireland, earlier this month for a two-day tour that included stops at Croke Park, Trinity College and Irish President Michael Higgins’ residence Áras an Uachtaráin. 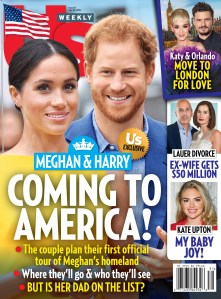 For more on Harry and Meghan’s trips across the pond, pick up the new issue of Us Weekly, on stands now!

‘The Bachelorette’ Season 16: Everything We Know
These Denim Joggers Are Our Secret to Cool, Casual Comfort
These Stunning Ruched One-Piece Swimsuits Show Just the Right Amount of Skin
END_OF_DOCUMENT_TOKEN_TO_BE_REPLACED