Jessica Simpson 'Felt Like a Call Girl' Amid Secret Affair With Movie Star
John Legend: How My Kids With Chrissy Teigen Adjusted to New Baby
You Love Dolly Parton’s Music, but Have You Read Her Books?
END_OF_DOCUMENT_TOKEN_TO_BE_REPLACED

After winning Miss Universe in 2012, Olivia Culpo became one of the most recognizable faces in the world. Since then, the model, 28, has graced the cover of magazines — most recently, the 2020 Sports Illustrated Swimsuit issue with Jasmine Sanders and Kate Bock — started her own businesses, starred in movies and more.

But there’s still so much people don’t know about her, like that she’s a classically trained cellist or how raw fish grosses her out. Want to learn more? Watch the video above — and scroll down! — to hear 25 things you might have not known about Culpo that she exclusively shared with Us Weekly.

1. My guilty pleasure is ice cream, hands down. My favorite flavor is mint chocolate chip.

2. I wish I could speak another language. I speak a little bit of Italian, but it’s nothing to brag about.

3. When I was a student at Boston University, I’d go home every weekend, I’d journal every day and read books. I wasn’t a part of the party crew.

4. No one believes me, but I was very chubby growing up.

5. My favorite class in college was acting because it was physical. I learned a lot.

7. My family is from Cranston, Rhode Island. My street [was named after me]: Olivia Culpo Way. When I won Miss Universe, it was so fun for our little state because not only had no one ever won [it before], no one had even won Miss USA. They were proud.

8. I own a restaurant in Rhode Island called Back40. Everyone should order the donut bread pudding.

9. I love Chrissy Teigen. She just says anything she wants.

10. I can catch things with my mouth really well.

11. My worst job was working at [one of] my family’s restaurants.

13. If I didn’t live in Los Angeles, I’d live in Charlotte, North Carolina, because that’s where my boyfriend, [Christian McCaffrey], lives. 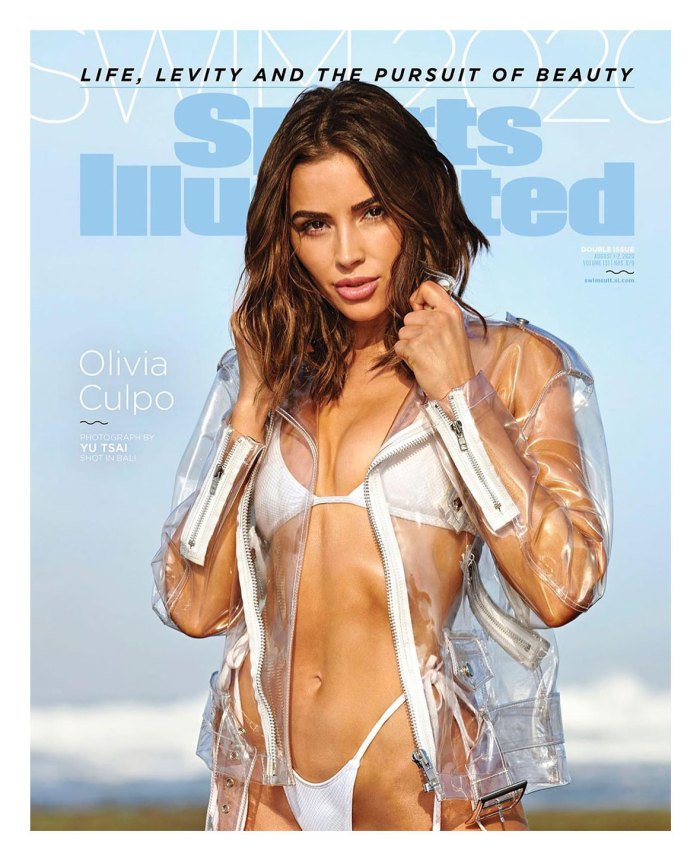 14. The best concert I’ve ever been to is Shania Twain.

15. While in quarantine, I learned the benefits of journaling, channeling your thoughts and [making] gratitude lists.

16. I started a mask company called More Than a Mask. All the proceeds go to Feeding America — one mask purchase equals 100 meals!

17. Brad Pitt was my celebrity crush growing up.

18. My first car was an old-school Land Rover.

19. Sometimes raw fish grosses me out. I know it’s healthy, so I try to eat [sushi], but I end up getting a Philadelphia roll and fried tempura.

20. When I was a kid, I wanted to be on the cover of Sports Illustrated, and now it’s happened! I’m truly honored.

21. I used to fangirl over Maria Menounos and Giuliana Rancic, and now they’re close friends of mine.

22. I’m a sucker for anyone who has a good relationship with their family.

23. Someone showed me the scene in The Proposal where the bird catches the little dog and takes it. Now I’m petrified for my doggy, [Oliver].

24. When it comes to dating, I don’t like anyone who swears too much.

25. I’m not athletic, but I try. I did play lacrosse, but I was the benchwarmer type.

Jessica Simpson 'Felt Like a Call Girl' Amid Secret Affair With Movie Star
John Legend: How My Kids With Chrissy Teigen Adjusted to New Baby
You Love Dolly Parton’s Music, but Have You Read Her Books?
END_OF_DOCUMENT_TOKEN_TO_BE_REPLACED