Get Your Glow On With These 10 Spring and Summer Must-Have Beauty Products
‘Vanderpump Rules’ Reunion Taping Postponed: 7 Questions We Need Answered at the Reunion
Stars Affected by the Coronavirus Pandemic: Tom Hanks, Orlando Bloom and More
END_OF_DOCUMENT_TOKEN_TO_BE_REPLACED

Confessions of an heiress. Paris Hilton confirmed she voted for president-elect Donald Trump in this year’s election and revealed her reason for doing so in a Thursday, November 17, interview with Australia’s The Project. Watch the clip above to see what she said!

Asked if she cast her ballot for longtime family friend Trump, 70, over his Democratic rival, Hillary Clinton, Hilton, 35, replied, “I’ve known him since I’m a little girl, so yes [I voted for Trump].”

As previously reported, the entrepreneur turned reality star previously refused to specify who she voted for when approached by TMZ on Election Day, Tuesday, November 8.

“My mother [Kathy Hilton] told me to never talk about politics or money,” Paris said, to which the TMZ reporter replied, “But you don’t listen to everything your mother says.”

The fragrance mogul responded, “I do about that!”

“I hope the best person wins,” she told TMZ. The cameraman then said, “If you don’t tell me who you’re voting for, I’m going to assume it’s Trump, right?”

Paris remained silent, but flashed a slight grin and let out a small giggle leading many to believe that she had voted for the ex–Celebrity Apprentice host.

During her Tuesday appearance on The Project, the Simple Life alum said that she appreciates when her business prowess is compared to Trump’s.

“That’s very flattering to hear, something like that, about the President of the United States,” she said.

When reminded of the kind words of praise Trump wrote for the back of the socialite’s 2004 book, Confessions of an Heiress: A Tongue-in-Chic Peek Behind the Pose, Hilton couldn’t help but smile.

“I have known Paris Hilton for much of her young life and have always recognized her as a great beauty,” the blurb read. “What people don’t know is that she is a great beauty on the inside as well.” 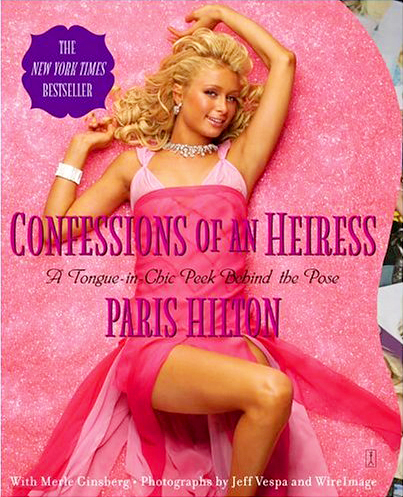 PHOTOS: Is Everyone (Including Duchess Kate) Getting Their Style Inspo From Paris Hilton?

Now that Trump is set to take over the Oval Office in January, Paris is prouder than ever that his complimentary remarks are forever printed on the back of her tome. “It’s pretty amazing. I’ve known him my entire life and he’s always been incredibly supportive of me, so I’m very proud to have that on my book,” she said on Thursday.

But just one year before she released her memoir, Trump — who was criticized during the presidential race for his degrading comments about women — made some eyebrow-raising remarks about Paris during a 2003 interview with Howard Stern.

“I’ve known Paris Hilton from the time she’s 12,” Trump — who admitted to watching her infamous sex tape, 1 Night in Paris — said on the shock jock’s radio show. “Her parents are friends of mine, and the first time I saw her, she walked into a room and I said, ‘Who the hell is that?’”

Asked if he “wanted to bang” Paris at the time, the real estate tycoon said, “She’s a very … Well, at 12 I wasn’t interested. I’ve never been into that. They’ve sort of always stuck around that 25 category.”

Get Your Glow On With These 10 Spring and Summer Must-Have Beauty Products
‘Vanderpump Rules’ Reunion Taping Postponed: 7 Questions We Need Answered at the Reunion
Stars Affected by the Coronavirus Pandemic: Tom Hanks, Orlando Bloom and More
END_OF_DOCUMENT_TOKEN_TO_BE_REPLACED