Your Horoscope: What’s in Store for You This Week!
‘Good Morning America’ Anchor Amy Robach Has Worked Hard For Her Money: Find Out Her Net Worth
Rob Kardashian’s Weight Loss Photos Through the Years Will Have You Rooting for Him
END_OF_DOCUMENT_TOKEN_TO_BE_REPLACED

Phaedra Parks is moving on. The Real Housewives of Atlanta star confirmed on Watch What Happens Live on Sunday, Dec. 21, that she and her estranged, incarcerated husband Apollo Nida are ending their marriage.

Parks caught up with host Andy Cohen on WWHL following Sunday’s tense new episode of RHOA. In the latest installment of the Bravo reality show, Nida is shown canoodling his not-too-receptive wife and attempting to get back into her good graces after being convicted of fraud.

The Atlanta-based attorney told Cohen that Nida’s efforts were in vain. He is currently serving an eight-year sentence at prison in Kentucky, and by the time he is released, he will likely be divorced. 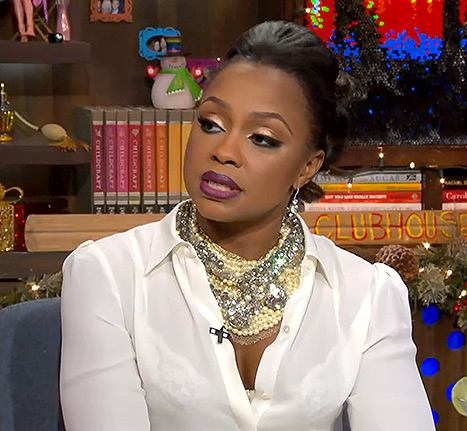 As Parks and Nida move toward parting ways, the outspoken star and her two young sons have been in contact with the jailed Nida. Before reporting to prison, he became a father for the second time when Parks gave birth to son Dylan, 19 months. The embattled couple also has an older son Ayden, 4.

“I talk to him at least, if not five, six times a week, if not more,” Parks said of Nida, adding that the kids are “definitely in contact” with their father.

“Well, of course we have a one year old, so he doesn’t really comprehend,” she added of Dylan’s understanding of his father’s whereabouts. “He’s just too young… Ayden definitely knows that he’s in Kentucky and Apollo told him where he was. He definitely is very aware. It’s very tough for a four year old.”

Watch Parks open up in the video above.

Your Horoscope: What’s in Store for You This Week!
‘Good Morning America’ Anchor Amy Robach Has Worked Hard For Her Money: Find Out Her Net Worth
Rob Kardashian’s Weight Loss Photos Through the Years Will Have You Rooting for Him
END_OF_DOCUMENT_TOKEN_TO_BE_REPLACED