The Bra Lady Gaga Loves With Nearly 3,000 Reviews
Shoppers Say This Is the Softest Cardigan You’ll Ever Own
77.9% of Users Sustained Weight Loss Over 9 Months Using This Program
END_OF_DOCUMENT_TOKEN_TO_BE_REPLACED

Good tidings for all! Prince William and Duchess Kate will host Prince Harry and Meghan Markle at their family’s home over the holiday season, a source reveals exclusively in the new issue of Us Weekly.

Prince Harry and Meghan Markle: A Timeline of Their Relationship

After celebrating Christmas Eve at Queen Elizabeth II’s Sandringham House, newly engaged Harry, 33, and Markle, 36, will join William and Kate, both 35, at their nearby Anmer Hall home in Norfolk, England. “They’ll be William and Kate’s guests and travel back and forth with them,” the source tells Us.

Come Christmas Day, the foursome will be served a traditional English breakfast, attend a mandatory 11 a.m. service at St. Mary Magdalene Church and then enjoy a lunch featuring two roast turkeys — a third is sent up to the nursery, where it’s carved up for William and Kate’s children, Prince George, 4, and Princess Charlotte, 2.

The royals (and soon-to-be royal Markle) will later retire to the fire-lit saloon to listen to the queen’s 3 p.m. taped speech. “In this year’s address, she will congratulate Harry and Meghan,” a source tells Us.

However, the Suits alum will bow out on Boxing Day to stay home with Kate, who is expecting her third child. “They’ve developed a friendship, and Meghan can turn to Kate for advice,” a source says. 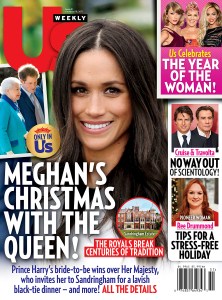 Harry and Markle, who announced their engagement on November 27, are set to marry at St. George’s Chapel at Windsor Castle in May 2018.

For more on the royal family’s holiday plans, pick up the new issue of Us Weekly, on newsstands now!

The Bra Lady Gaga Loves With Nearly 3,000 Reviews
Shoppers Say This Is the Softest Cardigan You’ll Ever Own
77.9% of Users Sustained Weight Loss Over 9 Months Using This Program
END_OF_DOCUMENT_TOKEN_TO_BE_REPLACED