Try The Rosé All Your Favorite Stars Are Drinking During Quarantine!
Celebrities React to Claims of Ellen DeGeneres’ ‘Toxic’ Workplace: Katy Perry, Brad Garrett and More
The 5 Most Comfortable Face Masks — From Tory Burch to Amazon
END_OF_DOCUMENT_TOKEN_TO_BE_REPLACED

Setting the record straight. Rihanna denied that she threw shade at Beyoncé on Instagram after not getting a 2017 Grammy nomination for Album of the Year.

Although Rihanna received eight nods this year — including Record of the Year for “Work,” her collaboration with ex Drake — her acclaimed album Anti was not nominated for Album of the Year, while Beyoncé’s stunning visual album, Lemonade, was. Shortly after the nominations were announced on Tuesday, December 6, Rihanna liked a fan’s Instagram post dissing Beyoncé, sparking rumors of a feud between the two pop superstars.

“Congrats and all to @badgalriri and all for her 8 Grammy nods but tbh f–k them because they snubbed her for Song of the Year and Album of the Year,” the fan wrote. “Like how my n—a!? I think they didn’t want her tied or passing someone else *cough cough* [lemon emoji]. Cause if they wouldn’t have played her she would have been in the lead with the most Grammy nods. F–k u Grammys, ANTI did amazing things this year and y’all played her. I think y’all shook!”

Word quickly spread online that the Barbadian beauty, 28, liked the post, leaving the Beyhive unhappy about what appeared to be a subtle dis. In response, Rihanna commented on the post to quash fan speculation.

“I never actually read your caption, thought the pic was funny and moved right along! Til I seen it pop up over and over!” she wrote. “I’m petty af, yes. But this is just unnecessary! I wish y’all would drop this topic and see things from the bigger picture! We don’t need to be putting black women against each other! We deserve to be celebrated, and the Grammy Academy agrees!” 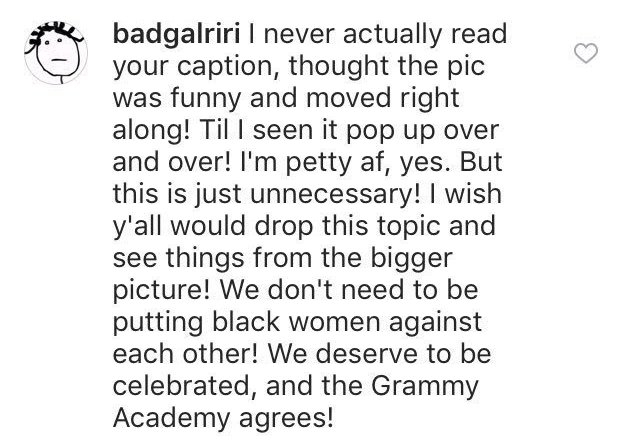 Despite the surprising snub, Rihanna is thrilled with the nominations she did receive. “How could y’all say that?” she replied to another fan’s comment saying Anti was snubbed. “8 nominations later! God is great!!!”

Try The Rosé All Your Favorite Stars Are Drinking During Quarantine!
Celebrities React to Claims of Ellen DeGeneres’ ‘Toxic’ Workplace: Katy Perry, Brad Garrett and More
The 5 Most Comfortable Face Masks — From Tory Burch to Amazon
END_OF_DOCUMENT_TOKEN_TO_BE_REPLACED