Spencer Pratt’s paternal instincts kicked into overdrive. When wife of 10 years Heidi Montag’s water broke around 7:45 a.m. on October 1, the 34-year-old rushed outside of their Santa Barbara home to tend to his 30 hummingbird feeders.

“There was no way our baby was going to come home to a starving hummingbird sanctuary,” he reveals in the new issue of Us Weekly, in which the couple also share first pictures of their newborn. “I was like, ‘This is an emergency!’”

The mission did not fly with Montag, 31. As her contractions intensified, “I tried being patient, but it was getting ridiculous,” she recalls. “I was like, ‘Honey, we have to go!’”

Nearly five hours later — and thankfully at the hospital — the duo welcomed son Gunner Stone. “It was probably the best possible labor,” explains the new mom. “I wanted to do it naturally, so I didn’t get an epidural. Spencer had Crystalarium bring $27,000 worth of crystals in there. So literally as my contractions are going, he’s running in, putting these huge crystals all over. It was mayhem!”

'The Hills' Stars: Then and Now

Pratt insists Montag’s delivery rocked thanks to the special gems. As she pushed, she was surrounded by an amethyst geode to emphasize healing, a pink rose quartz to activate love and a golden citrine to promote prosperity and eliminate stress.

“Gunner first saw his beautiful mother and then looked to his left and saw the most beautiful crystals,” says Pratt, noting the hospital staff complimented the “amazing” energy. “I was like, ‘Worth it for the magic!’”

Earlier in the day, however, he was more apprehensive about being the in room. “I will be honest, once she started moaning loudly, I was like, ‘This is way gnarlier than anything I am mentally prepared for,’” he explains. “Thankfully, Heidi’s makeup artist and now one of Gunner’s godmothers stepped in for the first couple hours.”

The makeover was a last minute decision. “I had a photo shoot scheduled that day, so I called Stella, my makeup artist, and was like, ‘Meet me at the hospital!’” says Montag. “She was doing my makeup as I’m having contractions and I was like, ‘Just get it on as fast as you can.’ She became my doula.” 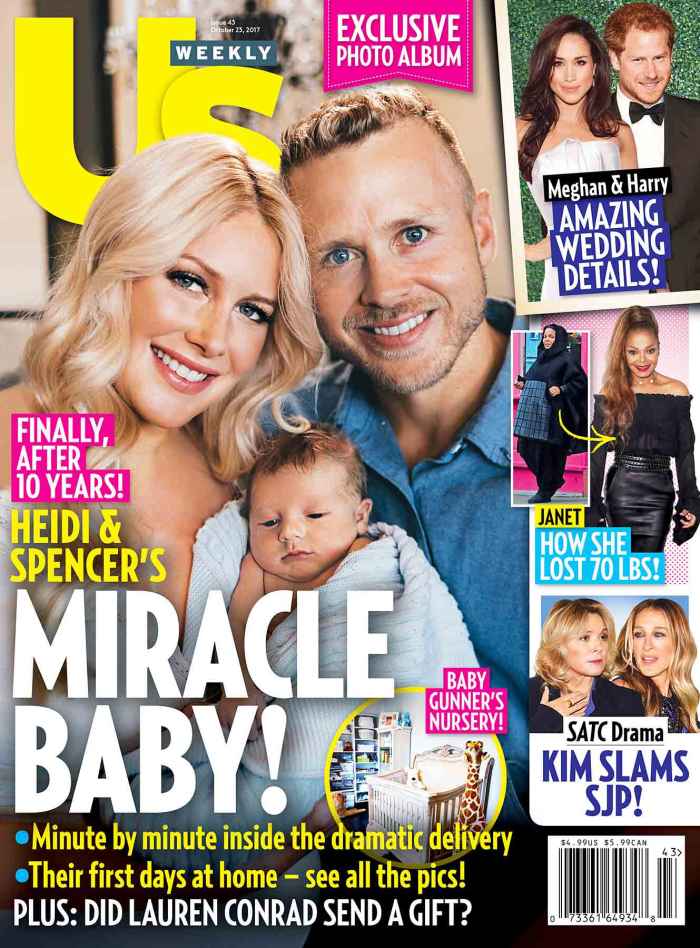 But when it came time to push, Pratt swooped in. “He was like an Olympic coach telling me, ‘You’ve been praying for Gunner all your life. Here he comes. Push him out!’ praises Montag. “He was the champion I needed. Even my doctor said afterward, ‘We couldn’t have done it without Spencer.’ He did get bullied into looking, though.”

An experience that still makes him cringe. “My plan was that I would not look at any action, but then this nurse was like, ‘Look at your son now!’ and I was delirious,” Pratt tells Us. “That was way too much for my brain to process. Thankfully, though, when they tried to bully me into cutting the umbilical cord I was like, ‘Nope.’”

At last, when it came time to hold Gunner for the first time, an emotional Montag was in awe: “I thought, ‘This was the little angel I had been carrying around for nine months! It was surreal.”

Pratt had his chance later while the newborn was being weighed. “We did our first selfie with Enya playing ‘Only Time,’ which is one of my favorite songs,” he reveals. “That was the moment when my brain started to officially explode. Holding him is still so unbelievable.”

As for the current selfie count? “I got an iPhone just for him, and I’ve already filled it up with videos and pictures,” says Pratt. Chimes in his wife: “I have hundreds, for sure!”

For more on Speidi — including exclusive first pictures of baby Gunner — pick up the new issue of Us Weekly, on newsstands now