Gayle King: Amy Robach, T.J. Holmes 'GMA3' Drama Is Getting 'Very Messy'
‘Good Morning America’ Anchor Amy Robach Has Worked Hard For Her Money: Find Out Her Net Worth
Rob Kardashian’s Weight Loss Photos Through the Years Will Have You Rooting for Him
END_OF_DOCUMENT_TOKEN_TO_BE_REPLACED

Well, that’s not something you see every day! Today show anchors Al Roker, Ellie Kemper, and Natalie Morales were hypnotized on live TV on Friday, July 17 — and the results were hilarious.

The three TV anchors were guided into their states of extreme relaxation by Richard Barker, a former police officer from the UK, who explained that he was trying to “debunk” misconceptions of what the practice entails.

“What we’re going to do is demonstrate the power of the mind and the power of suggestion,” he told the anchors prior to their session, reassuring them that there was no way any of them could get “stuck” in hypnosis.

Barker then had Roker, Morales, and Kemper sit down in chairs with their feet firmly on the floor and their hands in their laps.

At different points throughout the exercise, he told them that they were goldfish swimming in water and melting in an extremely hot room. 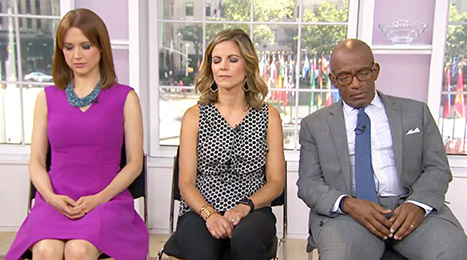 Things then got a little more creative. Barker suggested to Kemper, 35, that the bowl of ice cream he handed her tasted like “an ashtray,” and he suggested to Morales, 43, that it was a good idea to steal Roker’s shoes.

Morales promptly untied Roker’s right shoe and slipped her bare foot into it.

Barker had the most fun with Roker, however. The hypnotist suggested that the 60-year-old weather anchor howl “like a werewolf” every time anyone said the word “weather” — and he did.

Afterward, only Kemper seemed to remember a lot of what had happened during the segment, but Morales and Roker were dazed.

Added Morales: “I don’t remember taking [Roker’s shoe] off, but I remember that there was something hard to do, because your leg is heavy!”

Gayle King: Amy Robach, T.J. Holmes 'GMA3' Drama Is Getting 'Very Messy'
‘Good Morning America’ Anchor Amy Robach Has Worked Hard For Her Money: Find Out Her Net Worth
Rob Kardashian’s Weight Loss Photos Through the Years Will Have You Rooting for Him
END_OF_DOCUMENT_TOKEN_TO_BE_REPLACED