This One-Piece Swimsuit Is So Flattering, You’ll Never Want to Take it Off
This Family-Friendly Virtual Pet Game Will Be The Next Hit Of Your Household!
This Affordable Kaftan From Amazon Is Giving Us Serious Zara Vibes
END_OF_DOCUMENT_TOKEN_TO_BE_REPLACED

Twitter freaked out on Friday, January 20, after the White House website’s climate change and LGBT pages seemed to disappear immediately after the inauguration of President Donald Trump. But the apparently missing links only indicate a changeover between the two administrations.

All of the web pages originally associated with former President Barack Obama’s administration now live on an archived website at the URL obamawhitehouse.archives.gov, while the primary White House site, whitehouse.gov, currently has a limited number of workable links and pages.

“After January 20, 2017, materials will continue to be accessible on the platforms where they were created, allowing the public continued access to the content posted over the past eight years,” a statement reads on the archived site.

Ohio State law professor Chris Walker pointed out that even the Office of Management and Budget page appears to be down, so the disappearance of key social issues pages should not be interpreted as a sign of President Trump’s policy priorities.

Your Guide to All of the Inauguration Protests: How You Can Get Involved

Many users on Twitter were quick to note the different website interface and links, and the discovery of the missing pages soon went viral.

The new White House website has a full run down of all the magazines our First Lady has appeared on but the LGBT page has been taken down.

To delete cartain pages from the White House website, sends a message, when the deleted pages all represent disenfranchised minorities.

Trump, 70, has come under fire for his policies with regards to climate change since his election bid began in 2015. The former Apprentice host has denied the scientifically proven issue, instead blaming China for creating it as a “hoax.”

The President’s Environmental Protection Agency head, Scott Pruitt, did a complete reversal on his previous climate change denial during his Senate confirmation hearing on Wednesday, January 18, saying he does not believe climate change is a hoax, admitting that humans do play “some” role in the world’s changing weather. 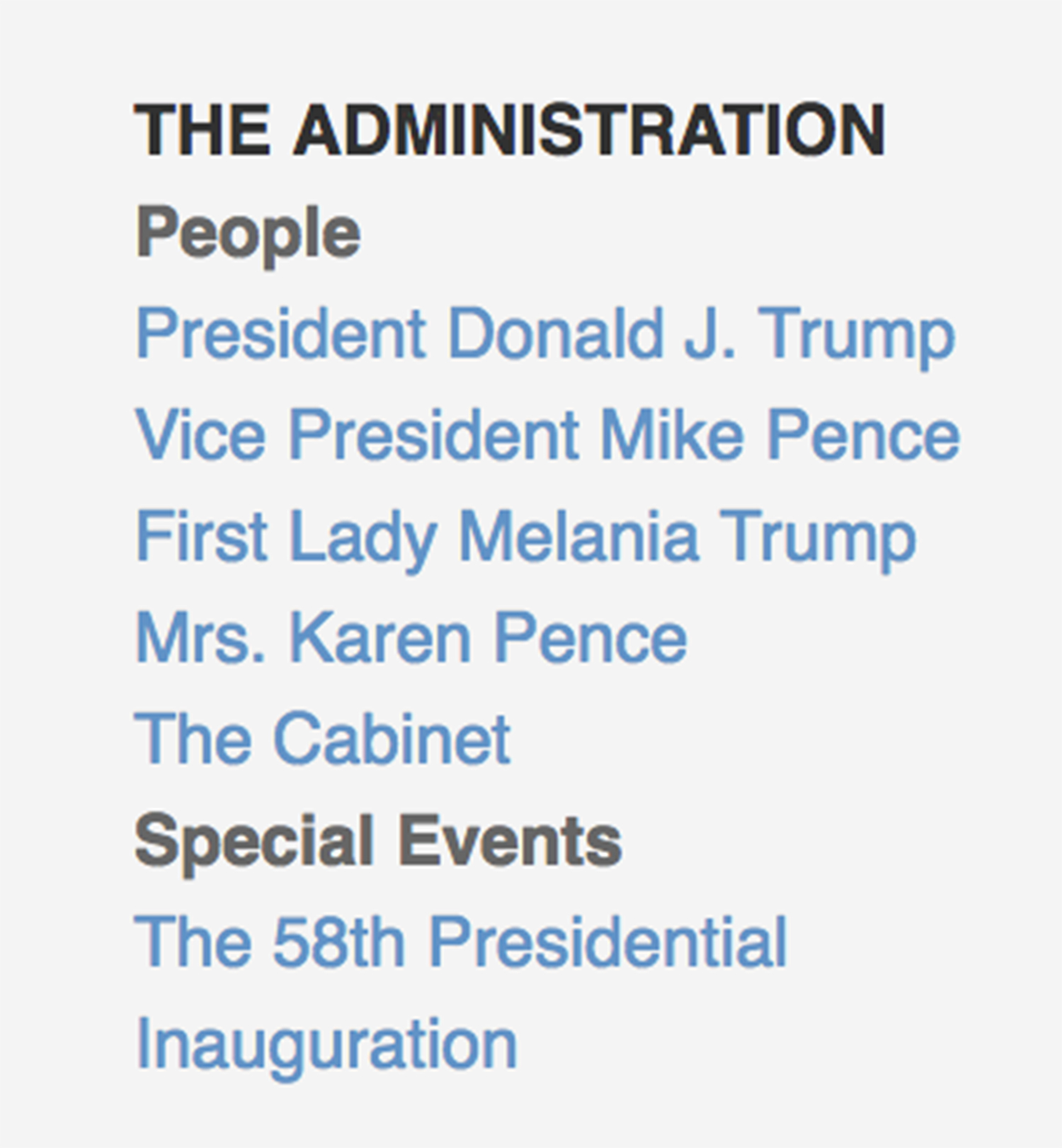 “Science tells us the climate is changing and human activity in some matter impacts that change,” Pruitt said during the hearing. “The ability to measure and pursue the degree and the extent of that impact and what to do about it are subject to continuing debate and dialogue.”

Vice President Mike Pence, meanwhile, has been a vocal advocate of anti-LGBT policies throughout his career, which also explains why Twitter users were so concerned over the missing page.

This One-Piece Swimsuit Is So Flattering, You’ll Never Want to Take it Off
This Family-Friendly Virtual Pet Game Will Be The Next Hit Of Your Household!
This Affordable Kaftan From Amazon Is Giving Us Serious Zara Vibes
END_OF_DOCUMENT_TOKEN_TO_BE_REPLACED