Sarah Michelle Gellar Admits Her and Freddie Prinze Jr.’s Parenting ‘Expectations Are a Little Higher Than Most’
Shoppers Say This Is the Softest Cardigan You’ll Ever Own
La Adelita Tequila: The Hottest New Drink in Aspen
END_OF_DOCUMENT_TOKEN_TO_BE_REPLACED

She doesn’t have a driver’s license and employs a posse of chauffeurs, but Queen Elizabeth II still loves to get behind the wheel — and put the pedal to the metal.

As part of the “royal prerogative,” the powers and rights the sovereign alone possesses, Elizabeth is the only person in all of Britain who can drive without a license — and she can go as fast or slow as she wants!

The queen has long been enamored of anything on wheels. In 1945, the 18-year-old then-princess, desperate to aid the war effort, joined the Auxiliary Territorial Service — and actually drove ambulances. Nowadays, though she owns a car collection that’s worth an estimated $13 million and includes vintage Bentleys and Jaguars, Her Majesty usually chooses to motor around in one of her rugged Land or Range Rovers, especially across the picture-perfect landscape at Balmoral, her rural Scottish retreat. 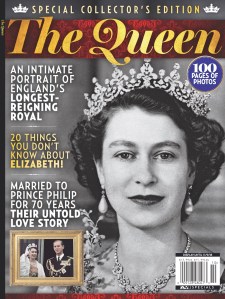 But over the years, the road-loving royal hasn’t been able to steer completely clear of trouble.

According to author and royal expert Phil Dampier, in 1993 she hurtled through Windsor Great Park at 60 mph — double the speed limit — forcing Nigel Dawson, who was out taking a stroll with his three young sons, to dive frantically for cover. Dawson was allegedly so upset — Elizabeth is said to have waved him aside when he shouted for her to slow down — that he made an official complaint and received a personal letter from the queen apologizing for the “alarm and inconvenience” she’d caused.

Dampier wrote that a nurse also complained that she and her son were driven off the road by the queen, who raced past with Prince Philip in the passenger seat. “She looked really sour-faced and angry,” said the nurse. “It was totally irresponsible.”

But should she break down one day on some remote country road, chances are Elizabeth would be able to get her car up and running in no time. As part of her wartime duties, she also trained as a mechanic, learning how to replace spark plugs, clean carburetors and even rebuild engines.

This is one sovereign who isn’t afraid to get her hands dirty!

Sarah Michelle Gellar Admits Her and Freddie Prinze Jr.’s Parenting ‘Expectations Are a Little Higher Than Most’
Shoppers Say This Is the Softest Cardigan You’ll Ever Own
La Adelita Tequila: The Hottest New Drink in Aspen
END_OF_DOCUMENT_TOKEN_TO_BE_REPLACED