Free Samples! Have Top Health & Wellness Picks Shipped to You at No Cost
These Denim Joggers Are Our Secret to Cool, Casual Comfort
These Stunning Ruched One-Piece Swimsuits Show Just the Right Amount of Skin
END_OF_DOCUMENT_TOKEN_TO_BE_REPLACED

Her best kept secret! Zoë Kravitz is engaged to boyfriend Karl Glusman — and has been for a while.

The 29-year-old Big Little Lies actress opened up about her personal life for Rolling Stones’ November cover story published on Monday, October 29, and gushed over her relationship status. “Oh yeah, I’m engaged,” Kravitz told the outlet. “I haven’t told anyone yet. I mean, I haven’t told the world.”

As for why the The Fantastic Beasts star kept her happy news underwraps? Kravitz noted she “wanted to keep it private.” 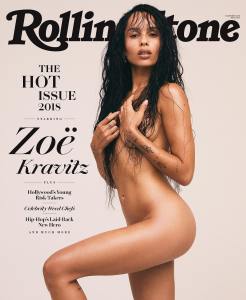 Celebrity Couples and How They First Met

Kravitz and the 30-year-old Nocturnal Animals actor had been dating for a year and a half when Glusman popped the question to his bride-to-be in February. (The couple met at a bar through mutual friends two years ago.)

“I can be my weirdest self around him,” Kravitz dished of her fiancé. “It’s so relaxing to be around someone where you can be a hundred percent how you feel.”

The Divergent actress also opened up about the almost-elaborate proposal. “I was in sweatpants,” Kravitz said, adding that Glusman was set to propose in Paris when work got in the way. “I think I was a little drunk. I could feel his heart beating so fast — I was like, ‘Baby, are you OK?’ I was actually worried about him!”

She continued: “He nailed it. And I love that it wasn’t this elaborate plan in Paris. It was at home, in sweatpants.”

Kravitz — who is the daughter of singer Lenny Kravitz and Cosby Show alum Lisa Bonet — recreated her famous mother’s naked photoshoot for Rolling Stones’ November cover, and Glusman couldn’t help but gush over his soon-to-be wife.

“My Love, my hero, best friend and greatest inspiration,” he captioned an Instagram post with her cover photo. “You’re so f–king cool @zoeisabellakravitz . Still pinching myself daily… THAT’S MY LADY!!!”

Free Samples! Have Top Health & Wellness Picks Shipped to You at No Cost
These Denim Joggers Are Our Secret to Cool, Casual Comfort
These Stunning Ruched One-Piece Swimsuits Show Just the Right Amount of Skin
END_OF_DOCUMENT_TOKEN_TO_BE_REPLACED