Not who he appears to be? Alana “Honey Boo Boo” Thompson claims in a sneak peek from Mama June: The Confrontation that dad Mike “Sugar Bear” Thompson puts on an act for TV cameras.

In a preview clip exclusive to Us Weekly from the Friday, April 14, reunion special for WE tv’s Mama June: From Not to Hot, 11-year-old Alana and sister Lauryn “Pumpkin” Shannon talk to Lynn Toler about Sugar Bear and Mama June Shannon‘s turbulent relationship. Mama June and Sugar Bear split in September 2014, and he married Jennifer Lamb in February 2017.

Biggest Costar Feuds Ever! These Celebrities Can’t Stand Each Other Off-Screen

When Toler says that Sugar Bear appears to be level-headed on TV, Alana claims that he needs “anger management.” She adds, “He puts on that face for TV to make him seem like he’s the perfect guy, but when he’s off camera and stuff, he’s really not. And Mama just got tired of it, so Mama told him, you’re going to have to start staying at hotels — you’re not staying at our house no more. And then he found Jennifer, and he didn’t come see me anymore.” 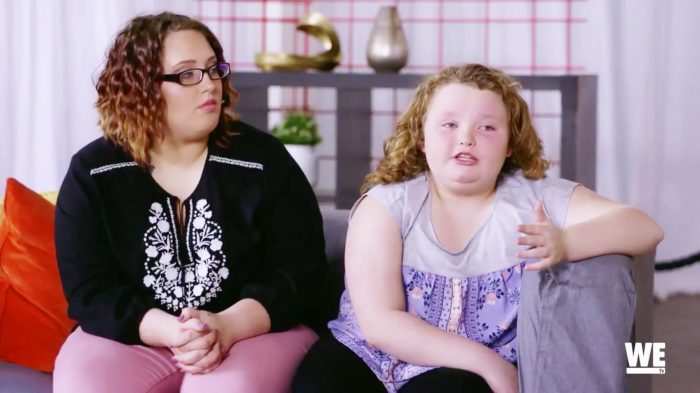 Toler wants to know how soon Sugar Bear started dating Lamb after splitting from Mama June, and Alana responds, “I think he was still talking to Jennifer when [he was with Mama June].”

Celebrity Single Moms Who Do It All!

During an April 11 appearance on The Wendy Williams Show, Mama June, 37, claimed that Sugar Bear was “very emotionally and physically abusive” during their relationship.

Watch the clip above. Mama June: The Confrontation airs on We TV Friday, April 14, at 9 p.m. ET.