Free Samples! Have Top Health & Wellness Picks Shipped to You at No Cost
These Denim Joggers Are Our Secret to Cool, Casual Comfort
These Stunning Ruched One-Piece Swimsuits Show Just the Right Amount of Skin
END_OF_DOCUMENT_TOKEN_TO_BE_REPLACED

When Elvis Presley entered the world on January 8, 1935, no one could have predicted the tiny 5-pound infant — whose identical twin, Jesse, arrived stillborn just 35 minutes earlier — would go on to become one of the most influential performers in history.

Elvis changed not only the face of music, but the culture of the entire country — no small feat for anyone, let alone a poor mama’s boy from the Deep South.

“Elvis had an influence on everybody with his musical approach,” legendary soul singer Al Green once said. “He broke the ice for all of us.”

Indeed, that influence can be seen and heard in the performances of countless modern-day entertainers. And Elvis’ songs — “Heartbreak Hotel, “Jailhouse Rock,” “Hound Dog” and “Don’t Be Cruel,” just to name a few — still sound as good as they did when they were first released more than a half-century ago.

His charisma was undeniable. Elvis was electric. He elicited a frenzy among his fans that was unlike anything the world had seen up until that point.

From the outside, there was little indication from his modest upbringing in Tupelo, Mississippi, that Elvis Aaron Presley would one day become a cultural icon. But his father, Vernon, knew from the start his boy was something special.

It was the loss of Elvis’ twin, he said in a 1978 interview, that set the stage for what was to come.

“I believe Elvis’ career and contribution to the world were fated from the first,” Vernon said. “During his early life, certain things happened that convinced me that God had given my wife and me a very special child for whom he had some very special plans.”

As an only child, Elvis shared an incredible bond with his parents, particularly his mother, Gladys, whom he called “Baby.” 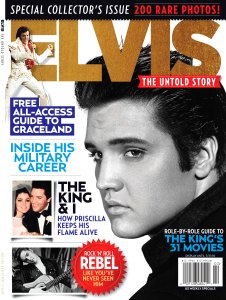 “It’s hard to describe the feelings Elvis, his mother and I had for each other,” said Vernon, who died in 1979. “The three of us formed our own special world.”

They were poor, but the supportive and nurturing environment provided the roots Elvis needed to blossom.

At 10, he won fifth place in a local singing competition. He got his first guitar at age 11, but never received any formal music training or learned to read music.

In 1954, a year after he graduated from high school, Sun Records producer Sam Phillips signed Elvis.

The King’s lifelong friend, disc jockey George Klein, once recalled: “Sam Phillips knew … he said, ‘If I can get a white guy that sings like a black person and has the feeling of a black person, I could make a million dollars.’ And he said, ‘I got him when I got Elvis.’”

His distinct “rockabilly” style — a combo of country and rhythm and blues — led to appearances on the Louisiana Hayride TV show and a management deal with Col. Tom Parker.

And things just snowballed from there. In November 1955, Parker sold Elvis’ Sun Records deal to RCA for $40,000. With his first $5,000 advance, the 20-year-old bought Gladys a pink Cadillac.

10 Bands That Went on Tour Without a Member

Elvis’ debut album, released in March 1956, became the first rock-and-roll collection to top the Billboard chart. He continued to set records until January 1957 when, just two days after his third and final appearance on The Ed Sullivan Show, famously filmed from the waist up, Elvis got his draft notice. He went on to serve two years in the military, most of that time stationed in Germany, where he met 14-year-old Priscilla Beaulieu, who would eventually become his wife and the mother of his only child, Lisa Marie.

Although four decades have passed since Elvis’ death on August 16, 1977, his legacy lives on. To this day, he remains the bestselling solo artist in music history, and hundreds of thousands of fans still flock to his beloved Graceland each year.

“It’s rare when an artist’s talent can touch an entire generation of people,” the late radio and TV icon Dick Clark once said. “It’s even rarer when that same influence affects several generations. Elvis made an imprint on the world of pop music unequaled by any other single performer.”

Free Samples! Have Top Health & Wellness Picks Shipped to You at No Cost
These Denim Joggers Are Our Secret to Cool, Casual Comfort
These Stunning Ruched One-Piece Swimsuits Show Just the Right Amount of Skin
END_OF_DOCUMENT_TOKEN_TO_BE_REPLACED
Close widget