No joke: After decades in Hollywood, Kathy Griffin has a story about everyone. And, lucky for us, she’s willing to share them all!

In her new book, Kathy Griffin’s Celebrity Run-Ins, the Emmy-winning comedian, 56, dishes on her moments with more than 125 celebrities, including the time a drunk Harry Styles met Tom Hanks backstage at an Eagles concert and why a certain daytime talk show host is mean.

Here, Us Weekly rounds up the most shocking revelations from her hilarious tome.

1. Jon Hamm and Ashton Kutcher aren’t the nicest people, like, at all.

Well, not everyone can be beautiful with a fantastic personality to match.

“You’ll never convince me to like Jon Hamm,” Griffin writes of the Emmy-winning hunk, 45, in her book. “The vibe I’ve always gotten from him is cold and somewhat disrespectful … toward me. I’m suggesting he’s one of these hot guys who’s mildly funny but actually thinks he’s comedian-level funny.”

Case in point: At an intimate, very starry dinner party hosted by legendary talent agent Sue Mengers, Griffin had her sights set on getting to Jack Nicholson. (Priorities, of course.) “So when Hammy showed up, too, inside I thought, oh great,” she reveals. “He even said to me, ‘What are you doing here?’ I said, ‘I earned my seat at the table. What are you doing here?’”

It was only downhill from there, especially as the Mad Men actor continue to throw back his drinks. While Griffin was discussing Rupert Murdoch with Nicholson, “Hammy picks that moment … to start whispering boozy yammering into my ear,” she admits. “First it was, ‘You know your Emmy isn’t a real Emmy.’ I let that one go, but then he whispered, ‘You’re so o-o-o-old.’”

It’s not necessarily the insult that upset her, either, clarifies Griffin: “Look, I’ve been told I’m old and not funny by a lot of guys — a lot of hot guys, too — but not when I’m in an intimate conversation space with frickin’ Jack Nicholson, an opportunity I figured I’d never get again; that’s the real reason I can’t stand Hammy. The double whammy of cruel but not playful comments and the horrible timing. Again, he’s not a comedian, folks. Hopefully done with the drink, but probably still Don Draper-y.” (Hamm went to rehab in 2015 for alcohol addiction.)

Her experience with Kutcher, now 38, is no better. In 2005, the duo cohosted a charity event for uBid.com. Kutcher, who had just married Demi Moore, refused to speak to her the entire time. (Don’t worry, she also doesn’t understand how that was even possible.)

“At least three separate times, we were standing in the wings, waiting to go out and present, and I’d say something like, ‘Hey, what if, when we go out, we do this … ,’ and suggest something, and he’d just ignore me,” she writes. “If he said five words to me the whole day, I’d be surprised. It was bizarre and rude and made me feel as if he thought I was beneath him, someone not worth talking to in the slightest.”

Three years later, she ran into him at a local Mexican restaurant with Moore, now 54. Griffin said hi; he did not. “If you won’t say hi to me in the Mexican takeout joint, you’re a d-bag.”

The final snub, however, occurred while she was talking to P Diddy at a party. “Kutcher stepped directly in front of me and started talking to Diddy as if I wasn’t even there,” she reveals. “So that’s three incidents. Do I loathe him? No. He’s just someone who’s made it perfectly clear to me that I have absolutely nothing to offer him during his precious time on earth.”

An Oscar winner and an heiress! Griffin once asked notorious ladies’ man Nicholson, now 79, if he was ever going to settle down. His response? “He said with a devilish twinkle in his eye, ‘I think when ole Paris Hilton turns thirty, I’ll be seventy five, and she and I will be exactly in tune, at exactly the right time for both of us,’” writes Griffin.

Unfortunately, what would have been the world’s most iconic duo never came to be. Continues Griffin, “I told Paris Hilton this story. She gave me her signature blank stare.”

3. She taught Will Ferrell and J.J. Abrams comedy.

You can thank her later. In the ’80s, Griffin worked at L.A.’s famous Groundlings improvisational theater. In her class: the Star Wars: Force Awakens director and the Saturday Night Live legend.

In fact, she used to double-date with Abrams! “That doesn’t mean Your Precious J.J. got anywhere near my girl parts,” she writes. “It meant we were the third wheels in trying to get his buddy Greg Grunberg to find true love with my friend Nancy Dye.”

These days, she just emails him, begging to make a Lifetime film. “I consider it my duty to give him s–t about his big movie directing jobs,” she adds. “In December 2015, I referred to his ‘new Star Trek’ movie, and he wrote back, ‘It’s Star WARS!!!!’ Isn’t that cute?”

As for Ferrell, now 49, she says he’s “lost to fame” but in the most deserving way possible. “He’s just so out of the stratosphere now with his career that I just don’t think it even occurs to him to say hello to his old pal Kathy,” she adds. “It doesn’t bother me one bit. He was always a funny, nice guy but there are some rocket ships to stardom you just don’t see coming, and Will — sweet, hairy, suburban Will — was one of them.”

4. Leonardo DiCaprio is a gorgeous “douchebag.”

Griffin’s first and only encounter with DiCaprio, now 42, was at the 2016 Directors Guild of America Awards. Naturally, she had to make a move.

Using pal Lily Tomlin as her “winglesbian,” she tried to grab his attention. “I stood up and said, ‘Don’t be a douchebag, Leo. Get off your f–ing phone and say hi to the great Lily Tomlin!’” she recalls. “He either didn’t hear me or chose to ignore me. You decide. I repeated it until he finally turned his head, pulled his precious phone away, and kindly said hello to Lily. (He’s gorgeous by the way.)”

From there, she continued to egg him on. “I said again, ‘Jesus, Leo, don’t be such a douchebag,’” Griffin recalls. “He walked away and with an adorable smile said, ‘I am a douchebag.’ Touché, Leo.”

5. She made out with Brian Austin Green — and he left his mark!

“I touched the lapel of his outsized suit, we stepped behind a large fixture, and started kissing,” Griffin recalls. “And then . . . he f–king bit me! . . . I guess second base for Brian Austin Green isn’t touching my tits — an appropriate next stage of intimacy — but branding me by leaving a mark, behavior which should be left behind in frickin’ high school.”

The following day, Griffin admits she donned a turtleneck “to cover my giant hickey from a 90210 cast member.” And later, while taping Suddenly Susan, she had to “wear beard cover makeup like an extra in Planet of the Apes.”

PHOTOS: Megan Fox and Brian Austin Green: The Way They Were

“I’m sure this was an isolated incident,” Griffin writes of her encounter with Kendrick, now 31, in 2011. “Or at least I’d like to think it was.”

At a Toronto Film Festival event, the Pitch Perfect star was seated at a booth near Griffin. The comedian recalls walking up, saying hi and then complimenting the actress on Up in the Air, which earned her an Oscar nomination for best supporting actress. “Really simple chitchatting, maybe thirty seconds,” she writes. “Then there was a pause, and since I’m not afraid of pauses in conversation, I just kept talking. Then she looked at me and very unabashedly said, ‘Um, I have to ask you to go. My cousin’s here visiting, and we need to catch up.’”

Griffin was caught off guard — and thrown off her game. “Seriously, if there had been a security guard in the vicinity, I wouldn’t have been surprised if Kendrick had snapped her fingers to him and had me forcibly escorted away,” she admits. “It was that weird and, to my mind, rude.”

In November 2014, Allen walked into a dinner party with adopted daughter turned wife Soon-Yi, more than 30 years his junior. “He announced, ‘I’m Woody, and this is my child bride!’” admits Griffin. “The bitter truth was that his child bride remark would be his opening and closing joke.”

But she did learn an important fact: The father of five has seen every episode of Disney’s Hannah Montana. “Not only that,” writes a shocked Griffin, “He continued by expressing his concern about what had happened to Miley [Cyrus] regarding her ‘current rebellious phase.’”

However, the real kicker came out the end, she reveals: “Woody said to me with what seemed to be complete sincerity, ‘And now I have to watch my friend Bill Cosby get railroaded by the media.’”

8. Fans confuse her with Kathy Lee Gifford, who is not her No. 1 fan.

Back in the days of Live With Regis and Kathie Lee, Griffin subbed for Gifford  — and fell in love with the hosts’ hair and makeup artist, Eve. So much so that she called her to do her up for other events.

“We arranged a time, but it didn’t matter, because as soon as I settled in, Kathie Lee barged in and very flamboyantly barked, ‘There’s only room for one redhead in this chair!’” writes Griffin. “I was laughing, but Eve had a look on her face that said, ‘Really, get out. Now. Seriously.’”

Griffin was also the redhead to receive misguided condolences after Gifford’s husband, Frank, passed away in August 2015. “I began receiving a string of cryptic tweets with a Christian tinge that were inordinately heartfelt and often came accompanied with the hashtags #blessings and #heaven,” she recalls, even wondering if it was a prank.

Alas, it was not. “Yes, on the day that Kathie Lee’s husband Frank Gifford passed away, legions of her fans sent well-wishing tweets to me, a foul-mouthed, gay-friendly atheist,” adds Griffin. “I’ll admit, the tug of war in my dark soul between ‘awwww’ and ‘this is hilariously wrong’ was immense, and if I say that tears were streaming down my face that day, I’ll let you wonder whether they were from sadness or uncontrollable laughter.” 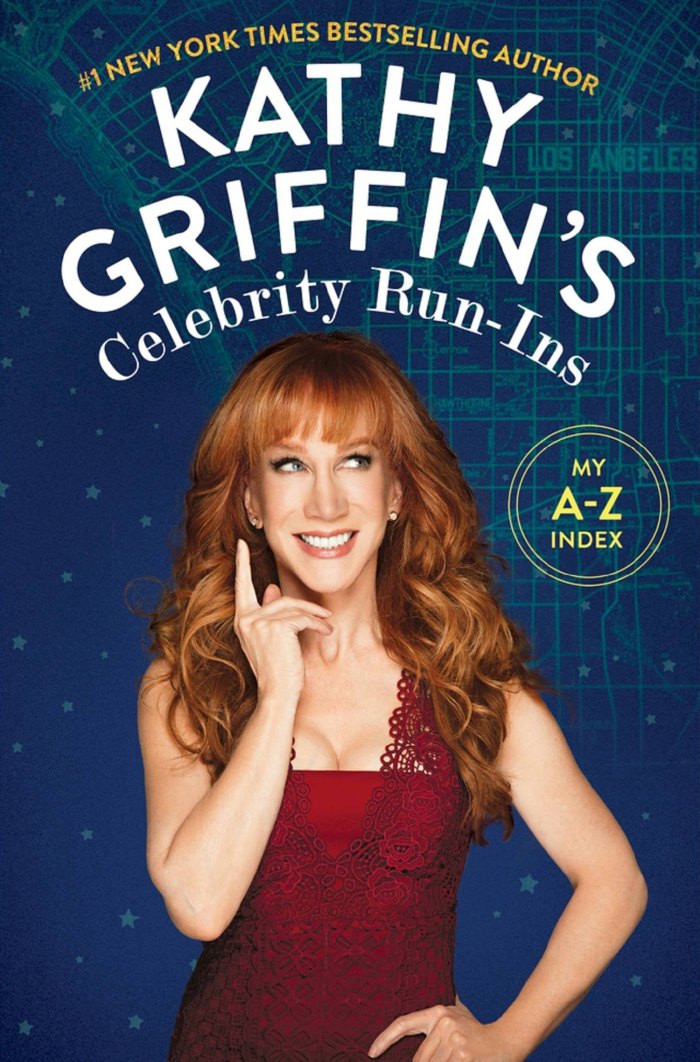 Unfortunately for Gifford, if there’s a mix-up, she’s likely to receive threats from Griffin’s haters: “For all I know, she’s had to erase hundreds of mean tweets from Lovatics, Beliebers, and Swifties looking for me. Maybe she and I should do a PSA together about the pitfalls of social media?”

For more on Griffin, pick up Kathy Griffin’s Celebrity Run-Ins, on bookshelves now!