Ashton Kutcher: Demi Moore's Miscarriage Was 'Really, Really Painful'
Pamela Anderson's Biggest Revelations From New Book, Netflix Documentary
Pedro Pascal Through the Years: From 'Game of Thrones' to 'The Last of Us'
END_OF_DOCUMENT_TOKEN_TO_BE_REPLACED

Shay Mitchell has no time for criticism! The Pretty Little Liars alum, who announced last month that she is expecting her first child with boyfriend Matte Babel, shared a snapshot of one of her meals on Instagram on Tuesday, July 2, and quickly had to fend off some harsh critics.

Stars Who Have Been to Tom Tom

“All I need …” the 32-year-old wrote alongside her feast, which featured a bread basket, prosciutto and melon, olives and a fresh tomato salad. In the background of the meal there was also a bottle of Pellegrino sparkling water and a glass of wine.

Not surprisingly, it didn’t take long for the naysayers to weigh in. “You shouldn’t eat that,” one Instagram user wrote, adding the pregnant woman emoji.

The model jokingly wrote back, “Can I have the wine tho?!” Currently her sarcastic reply has more than 1,900 likes. 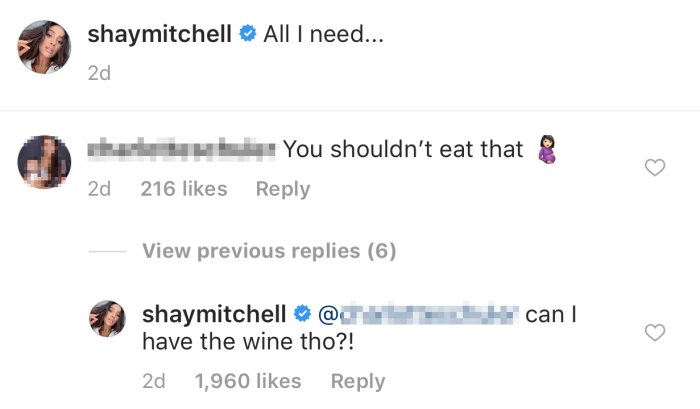 Still, there were several social media users who had a thing or two to say about Mitchell’s food choice. “You can’t eat anything raw,” one person wrote. “Deli meats are the worst.” Another added: “Don’t eat pork while pregnant.”

However, according to NHS, while prosciutto, which is cured ham, can be risky for expectant moms to eat, it’s not forbidden. We also don’t know if Mitchell ever actually ate the meat, as it could have easily belonged to her dinning companion.

Others were quick to come to the star’s defense. “Get ready for the onslaught of people who will now have opinions on what you eat, drink, wear and say …” wrote one. Another encouraged the actress to “enjoy yourself.” Judging by her social media, the You star is currently spending some time in Italy before her little one arrives.

Mitchell confirmed she was pregnant on June 28, about six months after revealing she suffered a miscarriage. “Does this mean I’m allowed to drive in the car pool lane at all times now?” the Mother’s Day actress joked in her happy announcement, which also included a snapshot of her bare belly.

Ashton Kutcher: Demi Moore's Miscarriage Was 'Really, Really Painful'
Pamela Anderson's Biggest Revelations From New Book, Netflix Documentary
Pedro Pascal Through the Years: From 'Game of Thrones' to 'The Last of Us'
END_OF_DOCUMENT_TOKEN_TO_BE_REPLACED