Get Your Glow On With These 10 Spring and Summer Must-Have Beauty Products
‘Vanderpump Rules’ Reunion Taping Postponed: 7 Questions We Need Answered at the Reunion
Stars Affected by the Coronavirus Pandemic: Tom Hanks, Orlando Bloom and More
END_OF_DOCUMENT_TOKEN_TO_BE_REPLACED

Listen up, working moms! As an actress, wife and parent, Olivia Wilde has managed to find the key to balancing her everyday life — and she exclusively revealed her advice in the new issue of Us Weekly.

It’s all about taking everything “day by day, step by step,” she told Us. “I think it’s just biting off as much as you can chew, you know, slowly and incrementally. And I think [it’s] knowing what you’re getting yourself into.”

So when she decided to make a two-year commitment to her directorial debut for Booksmart (out later this year), the House alum knew the responsibility she was taking on. “I just launched into that with kind of reckless abandon,” the mom to Otis, 4, and Daisy, 2, said, noting that again, she took life “day by day.” 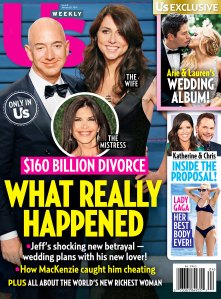 Olivia Wilde Is Having a Moment With Modest Fashion

While her hard work has paid off, unfortunately, her children have not been able to see their mom in action. “I haven’t been in anything they could watch yet,” the 34-year-old revealed. But they’re still showing interest in show business, especially their son.

Fiancé and dad Jason Sudeikis previously revealed on The Ellen Degeneres Show that Otis is obsessed with dancing along to Michael and Janet Jackson’s 1995 “Scream” music video. “He’s seen the video probably four times only but will do the choreography,” the actor, 43, quipped at the time, noting it’s even brought him closer with his younger sister.

“All Daisy wants to do is play, but playing to her is putting his toys in her mouth,” the The Last Man on Earth alum explained. “So he gets really mad about that, understandably. When I explained to him that that’s Janet Jackson and Michael Jackson and Janet Jackson is Michael’s younger sister, it’s like, ‘Oh, she might be useful!’ He recognizes that, which is good.”

For more on Wilde and Sudeikis’ children, pick up the new issue of Us Weekly, on stands now!

Get Your Glow On With These 10 Spring and Summer Must-Have Beauty Products
‘Vanderpump Rules’ Reunion Taping Postponed: 7 Questions We Need Answered at the Reunion
Stars Affected by the Coronavirus Pandemic: Tom Hanks, Orlando Bloom and More
END_OF_DOCUMENT_TOKEN_TO_BE_REPLACED