Brad Pitt sure knows how to treat his lady friends!

The actor has embarked on a hot new romance with rock star MIT professor Neri Oxman, as Us Weekly previously reported. In fact, “Brad is absolutely smitten by her,” an insider says in the new issue. “Their chemistry is off the charts.”

Since taking up with Oxman this past November, the father of six — who split from wife Angelina Jolie in September 2016 — has been spending plenty of time in the professor’s Cambridge, Massachusetts, apartment. After all, Pitt, 54, understands she has teaching commitments. “Brad has been spotted going into her apartment building on multiple occasions late at night and emerging the next morning after she leaves to teach,” explains the insider, adding the Oscar winner has been given his own key to her pad.

In the 42-year-old’s apartment away from prying eyes, the two can relax. “Neri doesn’t cook,” says the source. “They have been ordering food in from her favorite restaurants, and Brad has been doing a lot of cooking.”

He’s happy to tag along on professional trips too. “Brad and Neri have traveled together internationally,” says the Pitt insider. Most recently they went to the Design Indaba conference in South Africa in February where the Israeli native was a featured speaker. And though a second Pitt source claims “this is solely a professional relationship, there’s nothing more to it as of now,” the insider calls that story a cover-up, noting, “They are very much a couple.”

When they met, explains the insider, they took to each other immediately. After seeing a series of 3-D printed chaise lounges Oxman designed, Pitt arranged a face-to-face meeting. “Brad had only planned on spending two days at MIT last fall, but ended up staying for a week,” says the insider. “Neri invited Brad for dinner at her Cambridge apartment, which is very close to the campus. They got romantically involved almost right away.” 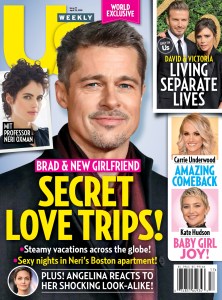 The attraction was so instant, adds the insider, that Oxman ended things with her boyfriend. “Neri had been dating a very wealthy man,” says the insider, “and dumped him almost immediately.”

Now, after a tough year and a half, Pitt has finally been able to find some happiness. And Oxman has everything to do with it. “Being around Neri is intoxicating, as if you are flying high above the mountains,” a second source says in the new issue. She certainly has that effect on Pitt, notes the insider. “Brad is glowing around her.”

For more on Pitt’s hot new romance — including Jolie’s reaction — pick up the new issue of Us Weekly, on stands now.