This One-Piece Swimsuit Is So Flattering, You’ll Never Want to Take it Off
This Family-Friendly Virtual Pet Game Will Be The Next Hit Of Your Household!
This Affordable Kaftan From Amazon Is Giving Us Serious Zara Vibes
END_OF_DOCUMENT_TOKEN_TO_BE_REPLACED

It was one of those milestones every proud dad eagerly awaits: Brad Pitt’s eldest child, Maddox Jolie-Pitt, had selected a college. But in the case of Pitt, 55, and his estranged son, 18, the Once Upon a Time in Hollywood star didn’t exactly get an emotional father-son moment to bond over the teen’s decision to study biochemistry at South Korea’s Yonsei University.

In fact, according to a Jolie-Pitt insider, the actor learned of his son’s plans right before the news leaked to the media earlier this month. “Brad hasn’t been spending much time with Maddox lately,” an insider reveals exclusively in the current issue of Us Weekly, adding that the Oscar winner wasn’t invited to join ex-wife Angelina Jolie, Maddox’s mom, to take the boy to school this month. “Brad won’t be going.”

That he wouldn’t be included in such a landmark event in his son’s life was unfortunately no surprise to Pitt. He and Maddox have had a strained relationship ever since the actor allegedly got into an altercation with the boy. He was subsequently cleared of any wrongdoing.

“Maddox doesn’t really see himself as Brad’s son,” another source adds. But, a family insider says even Jolie, 44, who has her own complicated feelings about Pitt, has urged her son to “move forward on a new path with Brad.” 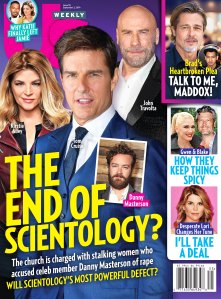 This One-Piece Swimsuit Is So Flattering, You’ll Never Want to Take it Off
This Family-Friendly Virtual Pet Game Will Be The Next Hit Of Your Household!
This Affordable Kaftan From Amazon Is Giving Us Serious Zara Vibes
END_OF_DOCUMENT_TOKEN_TO_BE_REPLACED