In the end, it may not be G-Eazy and Halsey. The musicians are taking a break after nine months together.

The “Bad at Love” crooner, 23, took to Instagram to address her relationship status after catching wind of split rumors.

“I normally keep this kind of thing private but provided our public nature I feel the need to inform my fans. G-Eazy and I are taking some time apart,” she wrote via an Instagram Story post on Tuesday, July 3. “I’m eager to continue the upcoming passage of time dedicating myself to my art and my career, and the duration of my tour. I wish him the best. Thanks for respecting our privacy at this time.” 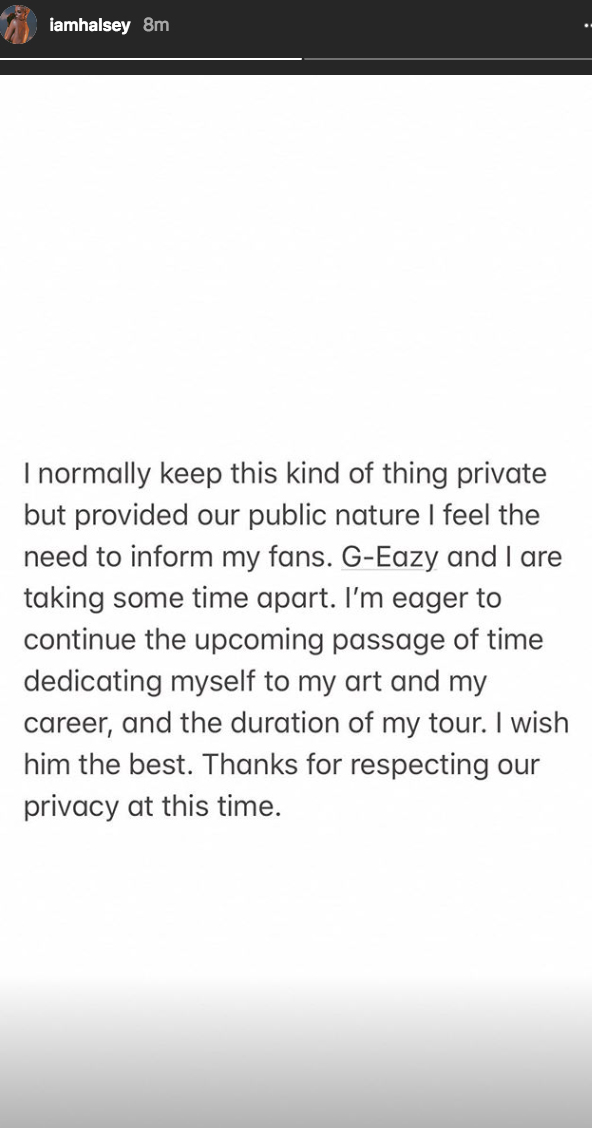 The duo began fueling split rumors earlier this week after eagle-eyed fans noticed their lack of engagement on social media. Many took to Twitter to point out that Halsey appeared to delete all of her Instagram photos featuring the “No Limit” rapper, 29.

Halsey also added fuel to the fire when she posted a photo of herself posing in a bathing suit near her pooch on Tuesday, July 3, alongside the caption, “kiss my dog on the forehead and then kiss ur ass goodbye.”

The “Now or Never” singer’s post sent fans into a frenzy. “ok did any of u notice halsey deleted all her recent pics w g eazy and then the caption on her recent pic,” one Halsey devotee tweeted on Tuesday. Added another: “so um did Halsey and G Eazy break up bc she out here posting hella sassy instagrams.”

Halsey also had fans wondering on Monday, July 2, when she tweeted the lyrics to her 2015 track “Colors.”

“You were a vision in the morning when the light came through,” she wrote. “I know I’ve only felt religion when I’ve laid with you.”

She also responded to a fan who pointed out how the lyrics can still be relevant three years later, although they may apply to a different person or situation.

“It’s really peculiar and beautiful when a song takes on a new meaning,” she explained on Monday on Twitter. “When it feels like it’s about a different person, or when a lyric about something nice turns mean, or vice verse. The songs evolve as we/I do. How amazing.”

G-Eazy jetted off to Paris on Monday and posted an Instagram photo of the Saint Laurent store on Tuesday with the subtle caption, “Honey I’m home.”

The former couple, who recently walked the MTV Movie & TV Awards carpet together in June, still follow each other on Instagram.

G-Eazy opened up about collaborating with his love on their 2017 single “Him & I” while speaking to Us Weekly in March at the iHeartRadio Music Awards.

“We’re coworkers, you know?” he dished at the time. “We both do this at a pretty high level and it’s really dope to get to share that kind of experience with the person you’re actually dating.”

The duo sparked romance rumors in the summer of 2017, following G-Eazy’s split from Lana del Rey. He and Halsey made their relationship Instagram official in September of that year.