Ready to wed! After just six months of dating, Hayden Panettiere is hopeful she’ll marry her boyfriend, Brian Hickerson, she exclusively reveals in the new issue of Us Weekly.

“I’ve lived a big life, I’ve met a lot of people. I learn something new from [Brian] every day, and that’s something that not many people can provide me with,” the Nashville star, 29, tells Us. When asked if she thinks they’ll tie the knot someday, she gushes, “I think so. I hope so.”

As for her favorite way of spending time with the aspiring actor? “I love being low key, being mellow, having experiences, having conversations, really in-depth conversations,” adds the Heroes alum.

This comes as no surprise. A source told Us in September — one month after the couple first stepped out together — that they “were getting serious.”

The actress was previously engaged to Wladimir Klitschko, and ended their nine-year romance in August 2018. They share 4-year-old daughter Kaya, who currently lives in Ukraine with the heavyweight champion boxer, 42, and his mother.

Watch the video above for more on Panettiere and Hickerson’s romance. 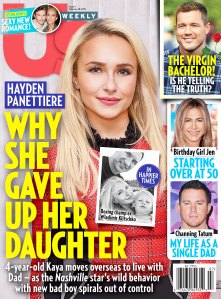 And for even more on the actress, pick up the new issue of Us Weekly, on stands now!